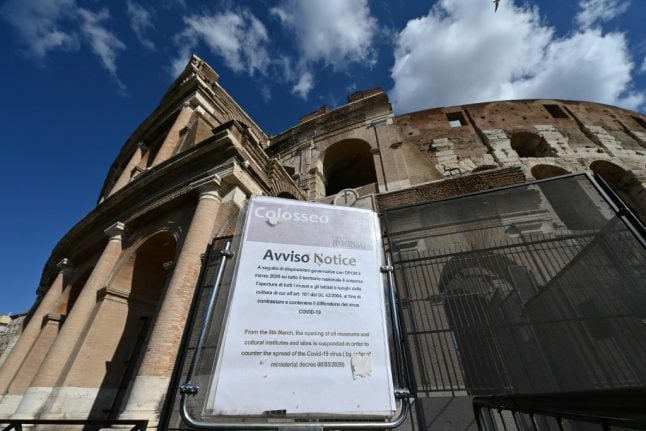 Rome's Colosseum is one of the tourist sites closed because of the coronavirus outbreak in Italy. Photo: Alberto Pizzoli/AFP

The measures had initially been imposed on certain regions in the north like Lombardy which has seen the biggest outbreak of the virus.

But on Monday evening, after it was announced the death toll had risen by 97 to 463, the prime minister said the measures would be imposed nationwide.

Those measures include banning all public gatherings and stopping travel other than for work and emergencies.

“Today is our moment of responsibility. We cannot let our guard down,” Prime Minister Giuseppe Conte said.

“Everyone must give up something to protect the health of citizens.”

The prime minister urged people to “stay at home”.

Weddings and funerals were banned for more than three weeks although religious institutions will stay open and bars and restaurants were told to close at 6pm. Customers had to stay a metre apart.

Conte said the measures, which will affect 60 million people, were needed to protect the country’s most vulnerable and people should now stay at home, Reuters news agency said. Businesses were urged to give their employees leave.

The decree came into force on Tuesday morning.

All sporting events will be suspended including Italy’s Serie A football league.

“I am going to sign a decree that can be summarised as follows: I stay at home,” Conte announced in a dramatic evening television address.

“The whole of Italy will become a protected zone,” he said.

Travel in and out of the country as well as movement between cities will be restricted.

But it was not immediately clear how all these measures will be imposed.

Trains and numerous flights continued to operate into and out of Milan on Monday despite the earlier set of restrictions for its Lombardy region.

The government had already moved to close schools and universities across the country as well as cinemas, theatres and gyms.

Another 1,897 cases were confirmed in the past 24 hours, Italy’s Civil Protection Department announced on Monday evening, bringing the total number of people confirmed to have contracted the new virus since the outbreak began to 9,172.

Of these, 463 have died, 97 of them in the past 24 hours. The majority of fatalities have been in people over 70, many of them with underlying health problems.

Another 724 people have recovered, 102 more than Sunday.

That left Italy with a total of 7,985 active cases as of Monday evening, an increase of 1,598 from the day before.

Italy has now recorded more than half of all the deaths reported outside China since the crisis first began to unfold at the end of last year.

The World Health Organisation added on Monday that around 70 percent of coronavirus patients in China have recovered.

ANALYSIS: Why have there been so many coronavirus deaths in Italy? More than half of all active cases are in Lombardy, the north-western region placed on lockdown as part of unprecedented efforts to contain the outbreak.

At a press conference on Monday evening, Italy’s minister for regional affairs, Francesco Boccia, said the government was working to bring containment measures into line across the entire country – raising the prospect that strict restrictions on travel and public gatherings could be extended further south.

Certain precautions are already in place nationwide, including keeping children home from schools and closing museums, historic sites, cinemas and other venues likely to draw crowds.

The government announced on Monday that all Italian ski resorts would be closed from Tuesday morning as part of the containment effort.

Italy’s Olympic Committee (CONI) also recommended that all sporting events in Italy – including Serie A football matches – be suspended until April 3rd.

READ ALSO: Life under lockdown: What’s it like to live in Italy’s coronavirus ‘orange zone’?

While all 20 of Italy’s regions have now confirmed cases of coronavirus, the large majority of active cases are concentrated in Lombardy (4,490) and Emilia Romagna (1,286). More than 2,900 people who have tested positive for the coronavirus in Italy have only mild symptoms and are in self-isolation at home, while some 4,300 are receiving treatment in hospital.

Another 700 are currently in intensive care.

Italy has carried out nearly 54,000 tests for the virus so far.

More than 70 percent of people who contracted COVID-19 in China have now recovered, according to the World Health Organization.

Most cases result in only mild symptoms, the WHO says. But the virus can be life-threatening to the elderly and people with pre-existing medical conditions including diabetes and high blood pressure.

READ ALSO: The everyday coronavirus precautions to take if you’re in Italy