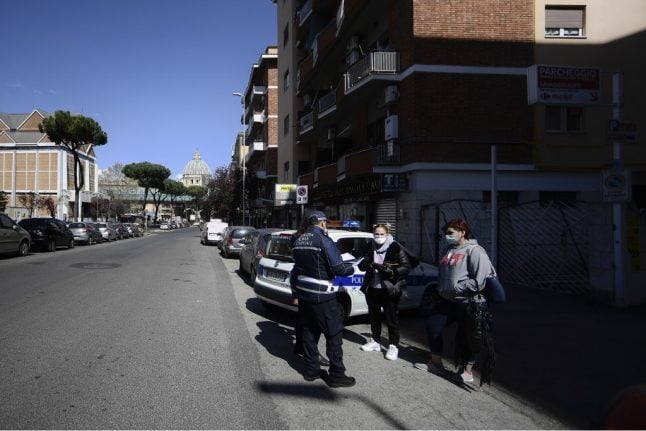 Everyone in Italy is required to fill out a standardized form whenever they leave the house, stating their reason for being outside, and to submit it to authorities if asked

The rules have been tightened several times by the Italian government since quarantine was first enforced, and each time, a new form has been issued.

The fifth and latest version of the form was released on Thursday afternoon to reflect the latest changes to the emergency decree.

Until at least April 3rd, people throughout Italy are being asked to stay indoors and venture outside only for the bare essentials.

You're allowed to leave your house for:

A previous option, returning home to the area where you're normally resident, is no longer allowed and that option has been removed.

Police can stop anyone at train stations, on roads or simply on the street – including pedestrians – and ask them to justify why they are outside. It is essentially an official declaration that:

These additions were made after the national government made it easier in the latest decree for regional authorities to bring in more of their own regularions.

Rules can now vary widely from one region to another, on top of the regulations in force nationally. You're advised to check the website of your region and comune to make sure you're up to date.

Where do I get one of the forms?

You can download the form here and print it out at home or at a tabaccheria (These shops are still open and have a sign with a big T outside).

Otherwise, police at checkpoints as well as officers checking people in the street are usually carrying a stack of forms to give out.

How do I fill it out?

The form asks for the following information (in order):

Here you're making the following declarations:

Examples of reasons to travel listed on the form include:

The form should be filled out in Italian. Ask someone to help you if you're not sure what to write. Do I have to print it out?

Now that justification is required simply to be on the street, you'll need to have a copy ready as soon as you leave the house.

Police at checkpoints (such as those at train stations) should also have a stack of paper forms available, and you can ask to take a few.

Alternatively you can copy out the whole thing by hand: make sure to write everything exactly as it appears on the form, in full.

What happens if the police stop me?

The Italian authorities reserve the right to check out your story and if they find it's not accurate, you could face a fine of hundreds or even thousands of euros – or even criminal charges and up to three months in prison.

If you're stopped and checked, a police officer may check the form and your ID, and then countersign the form (in the bottom right-hand corner where it says “L'operatore di Polizia) to say you've had your identity confirmed.

They may ask you to hand over the form: make you take a clear photo first for your records.

How many forms do I need?

You should expect to complete a new form for every journey you make.

Do I need any other documents?

Carry your passport and/or your Italian ID card with you, as well as your permesso di soggiorno if applicable.

If you're travelling because you live somewhere else in Italy and you need to return home, bring proof of your address.

If it's for work reasons, try to provide documentation from your employer, and if you need to travel for medical reasons, bring a note from your doctor or confirmation of your appointment.

It's not clear exactly what authorities will be looking for as proof, but as ever in Italy, it's probably a good idea to offer as many documents as you can.

Will I really be charged if I don't have the form?

Ever since Italy announced a nationwide decree nicknamed 'Io resto a casa' (I'm staying home) – first effective March 9th and since tightened repeatedly – there have been reports of police handing out fines to people caught travelling in Italy without an 'essential' reason, even within their own town.

Realistically police can't check everyone's papers, and whether they punish you is at each officer's discretion. Many people will probably just be told to go back home.

But the only way to be sure of avoiding problems is to follow the rules the Italian authorities have set, described above.

Travel in Italy was disrupted by dozens of localised strikes in January, and this is set to continue into February as Italian unions announced a further round of demonstrations affecting rail and public transport services in many areas, as well as airline travel.

Here’s an overview of February’s main strikes, which are again mainly local or regional, but include a national public transport strike on February 17th and a nationwide walkout by airport ground staff on February 28th.

February 5th-6th: Trenitalia staff in the southern Calabria region will strike from 9pm on Sunday, February 5th to 9pm the following day.

It’s currently unclear whether Trenord will operate minimum services on the day. See the company’s website for further information.

It isn’t yet clear how the walkout will affect air travel to and from the airport on the day.

A list of guaranteed rail services in the region is available here.

The strike was called in late January by Italian union USB to protest against precarious work contracts and privatisation attempts by the Italian state.

There currently aren’t any details as to what percentage of workers will take part in the action or how widespread the disruption is likely to be.

February 19th: Trenitalia staff in the Veneto region will strike from 9am to 5pm on Sunday, February 19th.