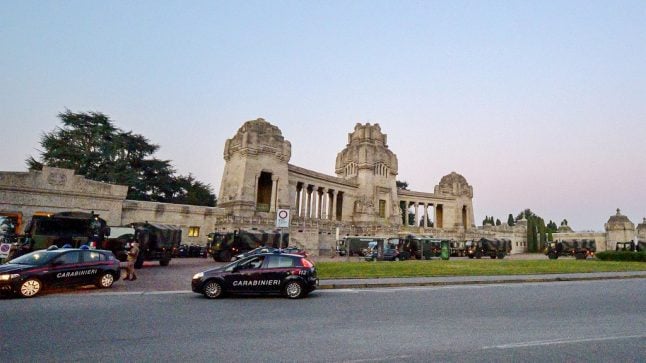 Police and undertakers outside a cemetary in Lombardy, northern Italy. Photo: STRINGER/ANSA/AFP

The total number of people who have died in connection with the outbreak in Italy is now nearing 5,500.

The numbers are expected to continue to rise, with nationwide quarantine measures implemented on March 10th not expected to start showing results for at least a few more days.

Experts have predicted the number of cases will peak in Italy at some point from March 23 onwards – perhaps in early April – though many point out that regional variations and other factors mean this is very difficult, if not impossible, to predict.

What do we know about those who have died?
The picture is becoming somewhat clearer as health authorities continue to release more data about Italy's victims.

“The data on mortality are deepening with the medical records of the deceased,” said the president of Italy's Higher Health Institute (Istituto Superiore di Sanità, or ISS), Silvio Brusaferro, as he presented the latest set of data on Friday.

The picture is very similar to that given by previous statistics in Italy: the median age of the deceased is 80, the majority of victims are male, and they had an average of 2.7 pre-existing health conditions. Undertakers move a coffin in the town of Bergamo, Lombardy, on Sunday. Photo: AFP
Almost all the fatalities were already suffering from serious health problems when the coronavirus infection was detected, according to the newest data from the ISS, which is based on a study of 3,200 patients and detailed analysis of the medical records of 481 people.
Just six of those in the smaller sample had no pre-existing health conditions, the data showed.
The most common pre-existing conditions were high blood pressure (found in 73.8 percent of the sample), diabetes (33.9 percent) and coronary heart disease (30.1 percent).

“Patients who died with coronavirus have an average age of over 80 years, 80.3. The peak of mortality is in the 80-89 year age range. Lethality, ie the number of deaths among the sick, is higher among those over 80,” stated Brusaferro.

The fatality rate among those aged under 30 is currently zero, and for under 40s it's 0.3 percent.

The rate rises sharply for over-70s. Table: ISS data from Wednesday March 18th.
Women made up 25.8 percent of the deceased, and 38 percent of patients overall. One of the possible explanations experts are looking at is the fact that statistically, men smoke more.

It's important not to confuse data on deceased patients with the overall data on patients diagnosed with the illness, the ISS stressed.

The study showed a 17-year difference between the average age of the deceased patients, and that of the virus-positive patients in general.

ISS data showed that almost 25 percent of all infected patients in Italy were between the ages of 19 and 50 years old. A police officer speaks to people passing through a road checkpoint in Italy. Photo: AFP

“Although preliminary, these data confirm the observations made so far in the rest of the world on the main characteristics of patients, in particular on the fact that the elderly and people with pre-existing diseases are more at risk,” commented ISS president Silvio Brusaferro.

“These are very fragile people who often live in close contact with others, and who we must protect as much as possible.”

But while both Italian health officials and media have been quick to point out that those at highest risk are elderly people with pre-existing health conditions, that fact does very little to reassure people – particularly in a country with a population as elderly as Italy's.

EU statistics show Italy has the oldest population in Europe by almost any count.

It has the lowest percentage of young people, and a higher percentage of those aged over 65 (22.6 percent as of 2018) than any of the other member EU states.
Its median age is now 45.9 years compared to the EU's median of 42.8, higher than any other European country except Germany.

“The lethality by age group in Italy is not higher than that of other countries,” Graziano Onder, Associate Professor of Geriatrics at the the Università Cattolica del Sacro Cuore, Policlinico A. Gemelli in Rome, told Italian media.

He pointed out that the Italian population has “a very high average age, and a significant percentage of the population has multiple diseases, a factor that increases the risk of death. It is no coincidence that the average number of pre-existing condtions observed in the deceased is 2.7 “.

This article was originally published on March 11, 2020, and has been updated with the most recent data.