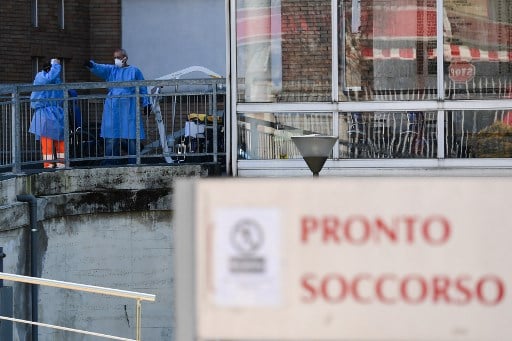 Staff bring emergency supplies to a hospital in Lombardy, the Italian region worst hit by the coronavirus crisis. Photo: AFP

After the Italian government this week announced unprecedented nationwide travel restrictions and the closure of most shops and businesses in an effort to control the deadly coronavirus outbreak, the country of 60 million people had to adapt quickly to huge changes.

Until April 3, there are to be no social gatherings, no unnecessary trips, no weddings, no funerals, no sitting in cafes, no gym visits, and no school – and as of Thursday, no leaving the house unless necessary.

Restrictions were initially imposed in the north of the country over the weekend, before being extended nationwide.

It’s a big adjustment, and many people looking on from outside the country are asking if such strict measures are really necessary – and if their own countries should do the same. An Italian police officer checks the papers of people passing through a checkpoint on Wednesday. Photo: AFP

Nino Cartabellotta, president of the Gruppo Italiano per la Medicina Basata sulle Evidenze (GIMBE), Italy’s foundation for evidence-based medicine, called the measures “drastic”, but said he welcomed the government’s decision to extend them across Italy – something his research institute has been calling for since the beginning of the outbreak in the country at the end of February.

“This is the only way we can effectively tackle the spread of the virus”, he said.

“In the absence of a vaccine or targeted drugs, social distancing measures are the only weapon at our disposition to counter the epidemic.”

“They are in line with the recent scientific evidence from the GIMBE Foundation, based on a systematic review published in the journal of the Center for Disease Control and Prevention (CDC).”

His organisation has been gathering data on the coronavirus outbreak since it began in China, and is part of a taskforce recently set up to advise Italy’s Ministry of Health.

Data analysis by GIMBE appears to show that the mortality rate in Italy (at 6.6 percent on Wednesday) is higher than that in China, though Cartabellotta explains this rough figure is “undoubtedly overestimated” at the moment as “we’re only seeing the tip of the iceberg”.

He calculates that with further testing the figure will eventually be found to be closer to 2.2 percent, in line with the rate in China.

The figure also shows huge regional variations within Italy itself; the mortality rate in Lombardy, the Italian region worst hit by the outbreak, is far higher than in any other part of Italy.

Yesterday the death rate among patients in Lombardy was 8.2 percent, compared to an average of 3.2 percent across all other parts of Italy.

“Lombardy is our Wuhan and the situation worsens day by day,” Cartabellotta said, adding that 75 percent of all Italy’s coronavirus deaths were reported in this one region.

“The dizzying increase in the number of deaths there is an alarming sign that the epidemic is bringing one of Italy’s best health services to its knees.” This, he explains, is why the government’s containment measures are so vital.

“The virus knows no borders,” he continued, “And the central and southern regions, already struggling to guarantee essential levels of medical assistance, will not be able to withstand a tsunami like the one that hit Lombardy. We’re risking a real disaster.”

“It’s essential that everyone strictly respects the social distancing measures,” he stressed.

‘Social distancing’ measures include the isolation of the sick, quarantine of those exposed to the virus, tracing contacts, school closures, and prohibition of gatherings – all of which Italy is doing.

“In fact, these measures, by reducing the transmission of the virus, delay the peak of the epidemic, and distribute the cases over a longer period of time, which allows the health system to prepare properly and better manage symptomatic cases,” he explained.

Should other countries now be following Italy’s lead?

“The data shows that the majority of European countries are about to face a battle identical to the Italian one. The surge in cases in France, Germany and Spain follows the same trend as in Italy. It’s just 7-8 days behind.”

“The more promptly containment measures are implemented, the more effective they are,” he added. “Considering this, it’s necessary to act immediately, because tomorrow will already be late.”

“Other European countries should learn from Italy’s experience – and mistakes.”