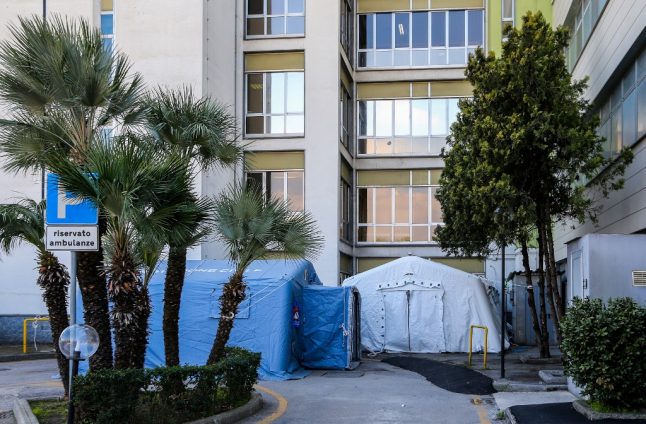 Tents set up outside the Cardarelli hospital in Naples for testing suspected coronavirus cases. All photos: Carlo Hermann/AFP

The rooms in “Building M” have been stripped out, with just the last few gurneys to be removed before new life-saving equipment, medicines and supplies can be installed in the freshly named “Coronavirus Wing”. Scenes are much like those previously reported by medical staff in Lombardy, the Italian region hit hardest by the outbreak, in the past few weeks.

Italy is the worst-affected country in Europe, with 827 fatalities and nearly 12,500 people infected by the virus as of Wednesday.

Over 1,000 patients are in intensive care, with almost 600 of those in Lombardy alne.

Though the worst of the outbreak is across northern parts of Italy, where healthcare is generally better funded and hospitals well-equipped, virologists have warned the disease risks becoming an epidemic in the poorer south too.

The leak to the media Saturday of the imminent “lockdown” of a large area of the north as a containment measure sparked panic and prompted people to flee south overnight – potentially carrying the disease with them.

Many of those who initially stayed would later take advantage of government permission to return home.

Lombardy currently has a 5,763 of the known cases, while Calabria at Italy's southern tip has 17, and neighbouring region Basilicata has just eight.

The south has also seen very few deaths. Five have been reported in Puglia so far, while the Campania region, of which Naples is a part, reported its first fatality on Wednesday. Ever-tighter quarantine measures have been imposed this week in attempt to control the spread, amid fears of a major outbreak happening in the south.

With even Lombardy's first-class health system creaking under the strain, the concern is hospitals
in southern regions, desiccated by years of budget cuts, will be unable to cope.

“The south is less prepared, and could pay a serious price for it,” Cararelli's director Giuseppe Longo, 63, told AFP.

“The state has asked us to get ready. We are employing hundreds of new doctors, nurses and medical staff,” he said.

Of the 5,400 or so intensive care beds in Italy, the seven southern regions and islands counted just 1,582 between them, according to the Repubblica daily.

Prime Minister Giuseppe Conte, who extended the “lockdown” to the whole country this week, said Wednesday the production and distribution of intensive care equipment for hospitals across the nation would be ramped up.

The Campania region currently has 149 cases: 56 are being treated in Naples' infectious diseases hospitals, with 11 in intensive care.

Should those numbers swell, the city's other hospitals – starting with the Cardarelli – will step up.

Its reconverted building will have eight intensive care beds and 12 high-dependency beds.

Should they fill up too, the hospital is ready to convert other wings, such as the elective surgery wards.

Masked figures in white protective suits stand ready at a tent set up outside the accident and emergency department, where any new arrivals presenting suspect symptoms will be tested. “The north was caught unawares, but we've had a bit of time to prepare. I hope it will be enough,” said Maria De Cristofaro, head of intensive care at the Cardarelli.

She said intensive care doctors were “being depicted as heroes… but we cannot perform miracles”.

It was “difficult to justify” the decision by many southerners working in the north to return home, she said, “bringing to virus into their houses, directly to their loved ones”.

Across the south, from Sicily to Puglia, people have also been contributing to fundraising campaigns for local hospitals.

“We have to help each other, because we have neither the necessary resources nor the equipment at the moment to fight,” she wrote on the gofundme website.