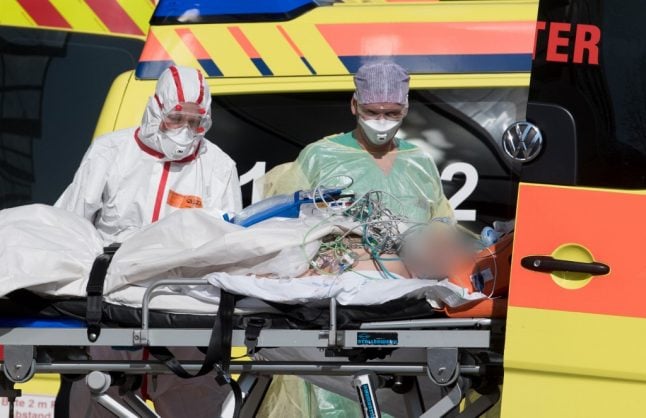 This brought the total number of deceased to 7,503, according to the latest data from Italy's Department of Civil Protection.

The total number of cases detected in Italy since the outbreak began has now passed 74,000

Italy registered fewer cases on Wednesday than the US (5,797) or Spain (5,552) according to the latest data.

Some 9,000 people in Italy who had been infected with the virus have now recovered  figures showed.

33 of the deceased are doctors, and a total of 5,000 Italian health workers have now been infected, according to data from Italy's Higher Health Institute.

Nearly 4,500 of the deaths were in the worst-hit region of Lombardy alone, and there have been more than 1,000 in Emilia-Romagna.

The majority of infections have also been in Lombardy, where the first cases of community transmission were recorded in late February, and in other northern regions

The world is watching closely for evidence that the numbers of cases and deaths in Italy are dropping and that nationwide quarantine measures taken just over two weeks ago have worked as hoped.

There were high hopes after the number of fatalities fell for two consecutive days on Sunday and Monday. But Tuesday's daily toll was the second-highest recorded in Italy since the crisis began.

However, while th number of cases continues to rise daily, it has now been slowing down for four days in a row.

However, few scientists expect Italy's numbers – if they really are dropping – to follow a steady downward line.

Experts have predicted the number of cases will peak in Italy at some point from March 23 onwards – perhaps in early April – though many point out that regional variations and other factors mean this is very difficult to predict.

Civil protection head Angelo Borrelli, who usually gives the updates every day at 6pm, was not present to give the numbers on Wednesday as he had reportedly been hospitalised with a fever.

Borrelli is awaiting the result of a second coronavirus swab test, after he had a negative test result a few days ago, Italian media reports.