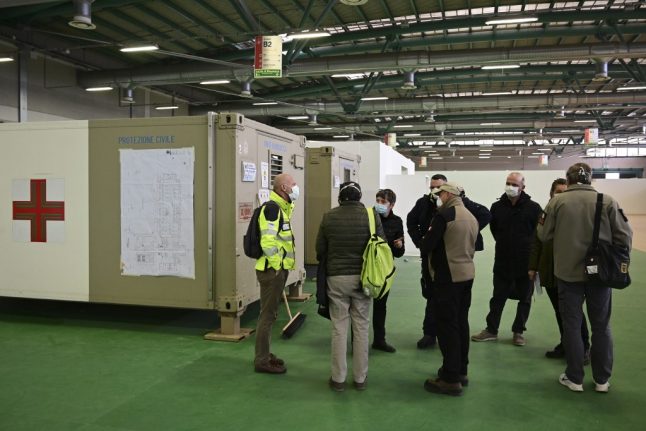 The infection rate however continued its downward trend, with the civil protection agency reporting nearly 86,500 confirmed cases in Italy – a 7.4 percent increase, down from around 8.0 percent in previous days.

That represents the smallest rise in recorded cases since the epidemic began, albeit health officials say the real number of coronavirus cases in the country is far higher than the 86,498 recorded.

The national commissioner for the emergency, Domenico Arcuri, said army helicopters were going to be used to speed up the distribution of emergency medical and sanitary supplies.

How Italy has changed the way it records daily coronavirus figures

Earlier on Friday experts said Italy's coronavirus epidemic could peak in the next few days, but regional authorities warned the crisis was far from over, as four more frontline doctors died.

The national health institute (ISS) cautiously suggested lockdown measures to curb the spread of the disease – which has claimed over 8,100 lives and infected some 80,000 people — may soon bear fruit.

“I want to be clear on one point. We have not peaked yet,” the institute's head Silvio Brusaferro said.

“There are signs of a slowdown, which makes us believe that we are close, we could peak in the next few days.”

But virologist Fabrizio Pregliasco warned that would not translate into a go-ahead to ease lockdown measures.

The slight slowing in case numbers “should strengthen our desire to continue. We must not drop our guard.”

READ ALSO: When will the coronavirus epidemic peak in Italy?

Military doctors and nurses battling the disease in field hospitals were thanked by Italy's defence minister Lorenzo Guerini, who said they were making the country proud.

“The battle is still a long one, we have a lot of work to do, but together we will succeed,” he said via Skype.

He warned, however, that “more sacrifices will be required of you” before the worst was over.