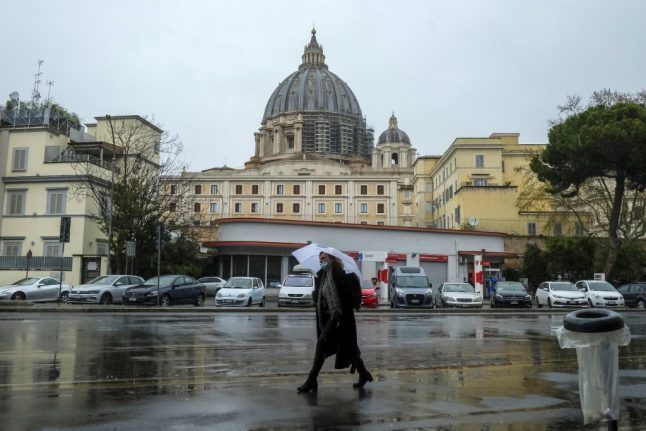 The national health institute (ISS) cautiously suggested lockdown measures to curb the spread of the disease — which has claimed over 9,000 lives and infected some 86,000 people — may soon bear fruit.

“I want to be clear on one point. We have not peaked yet,” the institute's head Silvio Brusaferro said.

“There are signs of a slowdown, which makes us believe that we are close, we could peak in the next few days.”

But virologist Fabrizio Pregliasco warned that would not translate into a go-ahead to ease lockdown measures, especially as Italy has just recorded it's highest one-day death toll to date – 969 fatalities.

The slight slowing in case numbers “should strengthen our desire to continue. We must not drop our guard.”

And Brusaferro said any lifting of strict measures would have to be done with extreme caution.

“We'll have to take careful measures for some months in order to avoid the epidemic curve rising again,” he said.

Italy's lockdown came into effect nationwide on March 9, extending strict measures put in place earlier across swathes of the north, where the epidemic began.

Prime Minister Giuseppe Conte said last week that the measures taken to close schools, bars and restaurants and restrict movement would have to be prolonged beyond the original end-date of April 3, without specifying until when. A general view shows coffins of victims stored in the church of San Giuseppe in Seriate, near Bergamo, Lombardy, on March 26, 2020, during the country's lockdown following the COVID-19 new coronavirus pandemic. AFP

The rise in daily confirmed cases on Friday edged down to the lowest point in the crisis — 7.4 percent.

But regional authorities in Italy's hard-hit north warned their hospitals were still under enormous strain.

“We have reached saturation point in intensive therapy, despite having doubled bed numbers,” said the head of the Piedmont region, Alberto Cirio.

“If this rate does not drop, we risk not being able to make it,” he said, while appealing urgently for extra ventilators.

The number of doctors killed by the virus rose to 44 on Friday, with nearly 6,500 health workers infected, ISS said.

The latest victim was doctor Annamaria Focarete, 70. One tearful colleague told AdnKronos news agency that “with her fighting spirit she seemed to have beaten it. Then a superinfection got her.”

Military doctors and nurses battling the disease in field hospitals were thanked by Italy's defence minister Lorenzo Guerini, who said they were making the country proud.

“The battle is still a long one, we have a lot of work to do, but together we will succeed,” he said via Skype. He warned, however, that “more sacrifices will be required of you” before the worst was over.

And fears persisted that case numbers would continue to rise in central and southern Italy despite the lockdown.

“The gloom is deepening hour by hour. Psychological support for doctors right now is not only necessary, it's indispensable,” said surgeon Liberato Aceto from the Santissima Annunziata hospital in Chieti, east of Rome.

“Conditions are getting increasingly difficult in the areas reserved for COVID-19 patients,” he said.

It was particularly hard not to be able to reassure those gripped by the disease and fearful for their lives.

The sanitary protective gear worn by doctors obliged to keep their distance as much as possible created “a barrier… an emotional distance”, and prevented them from making even the most basic of gestures.

“We can longer comfort a patient by holding their hand, or reassure them with a pat on the shoulder,” he said.