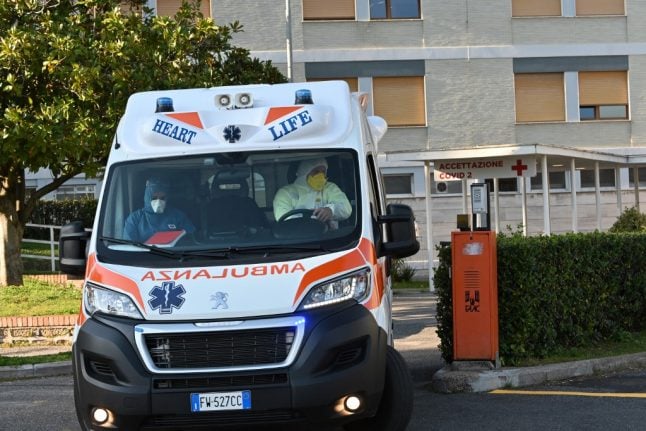 An ambulance leaves a temporary hospital set up to treat coronavirus patients outside Rome. Photo: AFP

With over 28,000 people in hospita,  including more than 4,000 in intensive care, beds need to be freed up as soon as possible, and those unable to convalesce in isolation at home are being moved to care homes or requisitioned hotels.

The virus has already infiltrated assisted living facilities across the nation, in what is being dubbed the “silent massacre”.

Hundreds of people in care homes are feared to have succumbed to the disease – over 600 in the hard-hit Bergamo area alone – though firm data are impossible to find, with many victims reportedly going untested, experts say.

They have voiced serious concerns over the safety of the 300,000 or so residents in Italy's 7,000 care homes. Health workers help a patient out of an ambulance. Photo: AFP

“In a war like this, we can't expose ourselves to the danger of a recurrence of new outbreaks that risk turning care homes into 'biological bombs' that spread the virus,” Raffaele Antonelli Incalzi, head of Italian geriatric society SIGG, told AFP.

“Widely using care home beds to ease pressure on hospitals… would put the elderly residents at risk, and they are the weakest link in this pandemic,” he said.

Some 2,000 patients have already been transferred to care homes in Lombardy, the epicentre of the crisis, while the Marche region in central Italy and Sicily in the south have begun following suit, said SIGG.

Figures for the numbers of patients involved nationally had not yet been compiled, it said.

Matteo Villa, research fellow at the Italian Institute for Political Studies (ISPI), told the foreign press association on Monday that regional data showed a significant proportion of those discharged from hospital still had the virus.

The government has said strict rules apply to which facilities can be used to ensure no contamination takes place, from physical distancing, to training staff and equipping them with protective gear.

“Who's going to be checking the rules are enforced?” Marco Agazzi, president of the Bergamo branch of the national union of Italian doctors, told AFP.

“There are enormous difficulties in accessing protective gear, and if new recruits cannot be found it will mean taking away essential staff at already overstretched facilities,” he said, describing the government's decision as “extremely perplexing”.

Italy's national health institute said 86 percent of care homes surveyed reported difficulties getting hold of protective equipment, while 36 percent said they were struggling due to staff off sick.

Worried relatives have been bringing staff homemade masks and non-medical gowns in the hope it will stop them catching the virus and spreading it to loved ones, many of whom are in their 80s and 90s, SIGG said.

Pensioner trade unions have been calling for hotels, student housing or military barracks to be used instead.

A national lockdown imposed three weeks ago appears to be working, with the ISS saying on Tuesday that infections have begun to plateau.

But Villa warned coronavirus recovery times meant the pressure on hospitals would only reduce slowly – and could very well rise again when the punishing lockdown is eased, meaning care home beds would still be in demand.

“It's unrealistic to imagine there won't be any other moments of stress on the health system,” he said.