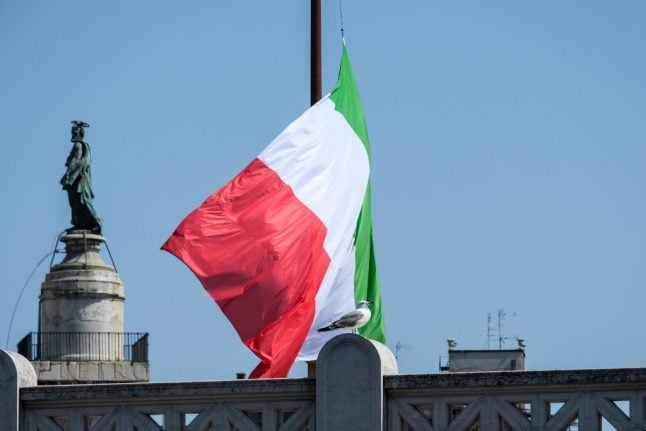 An Italian flag flying at half-mast in Rome on Wednesday. Photo: AFP

Another 4.782 cases of the new coronavirus were confirmed on Wednesday, according to the latest daily figures from Italy's Civil Protection department.

This represented a slightly faster rise in the number of new infections for the first time in six days – the rise has been gradually slowing day by day.

In total Italy has now confirmed 110,574 cases of coronavirus since the outbreak began, including the deceased and recovered patients.

Another 1,118 people had recovered on Wednesday figures showed, making a total of 16,847.

The death toll was slightly lower on Wednesday than on Tuesday, but some doubts were raised about the accuracy of data on fatalities.

This brings the total number of fatalities to  13,155.

Significantly there was only a rise of 12 in the number of patients in intensive care – 4,035 compared to 4,023 on Tuesday. In the early stages of the epidemic in Italy the number would rise by hundreds each day.

Italian officials acknowledge that their coronavirus data are incomplete because deaths from COVID-19 related causes outside hospitals are not counted.

The number of people who died after catching the virus without ever being tested is unknown.

So is the number of people who died of other causes because they could not get treatment at an overstretched hospital.

READ ALSO:  How Italy has changed the way it reports the daily coronavirus figures

Some newspapers are asking why jumps in March deaths reported individually by some cities do not appear to be reflected in the national tally.

“The death count does not add up,” the Il Fatto Quotidiano said on Wednesday.

Bergamo Mayor Giorgio Gori said Wednesday he does not trust the official figures and thinks the real toll may be twice as high.

The mayor tweeted a newspaper analysis suggesting that the COVID-19 toll in the Bergamo province was “between 4,500 and 5,000, and not the 2,060” officially reported.

He also cited a local statistics agency analysis showing that 26 percent of Bergamo province's 1.1 million people had the virus.

“I fear that the real figure is higher,” the mayor tweeted.

High Health Institute president Silvio Brusaferro also said on Tuesday that the death toll may be higher than the official figures, which don't include people who died at home, in nursing homes and those who were infected by the virus but not tested.

“It is plausible that deaths are underestimated,” he said.

“We report deaths that are signalled with a positive swab. Many other deaths are not tested with a swab.”

READ ALSO: Fears in Italy shift to growing number who can't afford to eat after shutdown