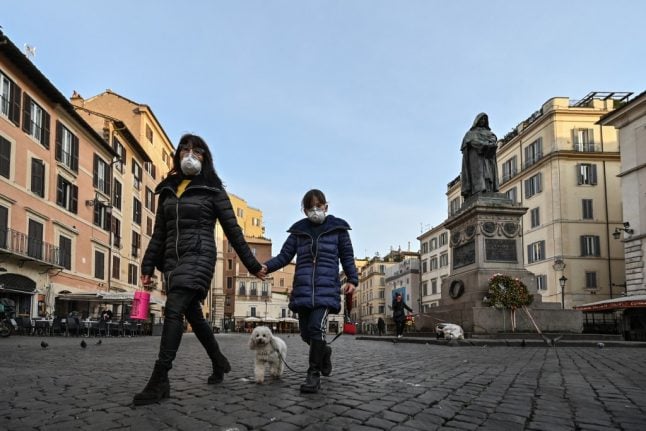 Since national quarantine measures were enforced in Italy on March 12 there has been much confusion over whether you can go out for a run or even a walk, and whether parents can take children outside for some fresh air.

READ ALSO: The form you need to go outside under Italy's coronavirus rules

This has been especially unclear due to different regions imposing their own rules and individual police officers interpreting the new laws differently.

The Italian Interior Ministry on Tuesday sent out a circular to regional authorities clarifying how the rules should be enforced.

After numerous appeals to the government to let children outside for some fresh air after three weeks of quarantine, the government has said that it is allowing parents to take under-18s out for a short walk.

Each child can be accompanied by one adult – unless the children are siblings, in which case only one adult should be supervising them, the rules state.

Going out for a walk and a breath of fresh air near home is fine, though bike rides, games and other activities are still not allowed, the Interior Ministry clarified on Tuesday.

Elderly and disabled people are also allowed out for a short walk near home. No more than one other adult may accompany them.

Nothing changes when it comes to adults going for a run, jog or walk alone. This is allowed, as these all count as forms of exercise, as long as people stay “near home”. Though exactly how near may depend on regional rules, with some local authorities requiring people stay within 200 metres of their homes.

“The motor activities allowed should not be understood as equivalent to sports (jogging)”, the text stated.

People are allowed to walk or run “in the vicinity of their homes” but are still “forbidden to carry out recreational activities outdoors, and access parks, villas, play areas and public gardens,”

This exercise, according to the circular, is allowed for “reasons of necessity or health”.

Anyone going outside for these reasons must still complete a self-certification form and take it with them. The new guidance sparked criticism from some regional authorities who said it gave the wrong message to the public at a crucial moment.

“This is not the time to let your guard down. The circular issued by the Ministry of the Interior risks creating a devastating psychological effect by frustrating the efforts and sacrifices made so far,” Lombardy's Regional Councilor for Welfare, Giulio Gallera, told La Repubblica.

It “could be taken as a signal of easing of the containment measures,” he contiued. “Strict, important measures which have allowed us to contain the curve of the coronavirus contagions.”

“The light at the end of the tunnel is likely to go out completely when ambiguous messages are given: the useful indication for everyone must be to stay at home for a few more weeks. Only in this way will we be able to defeat this sneaky and invisible enemy. “

In response, the Interior Ministry stressed that the rules had not been relaxed but these were “only interpretative details of the current regulatory framework.”

“You can leave your home only in the cases already provided for by the emergency decrees: for work, for reasons of absolute urgency or necessity, and for health reasons “.

Some regions are on Wednesday continuing to follow different rules, despite the national government's guidance. Everyone living in Italy is advised to check their regional authority's website to find out what is and isn't allowed where they are.

Last week the government upped the maximum fine for breaking quarantine rules from €206 to €3,000 euros. Penalties are even higher in some regions under local rules.

READ ALSO: How lockdowns and restrictions across different European countries may have saved lives