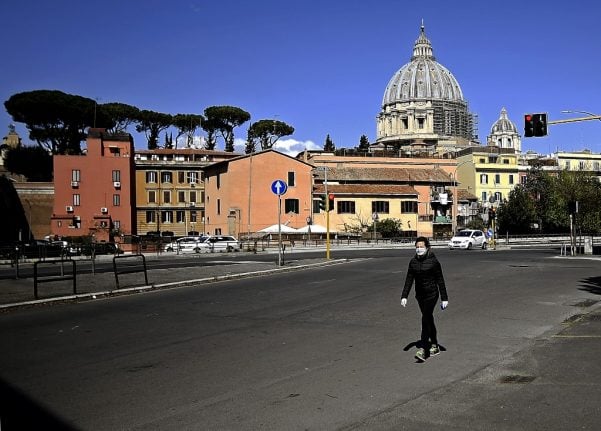 National lockdown measures were enforced in Italy on March 12th, and are set to remain in place until April 13th at the very earliest.

Italian Prime Minister Giuseppe Conte is on Tuesday consulting scientific experts about ways to safely end the lockdown, with Italy anxious to get back to work.

The measures show early signs of having contained the outbreak – which has killed more then  17,000 people in the country – but the near-total economic shutdown has also left millions unemployed.

Conte's videoconference with the government's scientific committee comes just one week before the closure of most businesses and factories is set to expire.

The measures are widely expected to be extended for weeks or even months beyond the current end date of April 13. Conte said last week that measures would be loosened very gradually, explaining that the government would look at implementing “phase two” of the shutdown, which he said would involve “coexistence with the virus”, before they could think about “phase three”, when the country would gradually get back to normal.

However no date for the beginning of “phase two” has yet been proposed.

“From an epidemiological point of view, we can start talking about 'phase two' when there are no more infections,” said leading Italian public health expert Nino Cartabellotta, President of the Gruppo Italiano per la Medicina Basata sulle Evidenze (GIMBE), Italy's Group for Evidence-based Medicine.

“Various predictive models place this date between the end of April to mid-May,” he told Italian Radio24, stressing that it's “not possible to make concete predictions.”

“Before that date, starting to think about reopening of any nature is extremely risky,” he continued, saying there's a “medium to high” risk of a new outbreak “as happened for example in Hong Kong.”

It is not yet clear what would change under “phase two”.

Officials are reportedly now studying procedures and discussing which businesses should be allowed to resume activity first.

But while some economic activity may resume under phase two, many other measures are expected to remain in place amid fears of a new wave of contagion.

Schools are expected to remain closed until at least September, Italian media reports.

The scientific committee is expected to issue recommendations about which factories might be allowed to resume safe operations as early as April 14, AFP reports.

Health officials warn that though the outbreak appears to have peaked in some areas, this is only because of the various closures and bans in effect.

Experts say the south of the country is still “at risk” and insist on keeping the containment rules in place for as long as possible – perhaps until a vaccine is developed, or tests which can reliably show who has immunity against the new disease.

But Italian businesses say they cannot afford to stay closed much longer.

A study released on Tuesday by the Confcooperative small business lobby said the economy was being subjected to an “epochal shock” that would take at least two years to recover from.

Meanwhile the government has announced emergency financial support for businesses, including a total of 750 billion euros in government-backed loans for businesses of all sizes.

It has already announced some emergency aid measures for self-employed workers and others left with no income due to the shutdown.

With people in Italy's poorer southern regions especially hard-hit financially, and a growing number now unable to afford food, some mayors have warned that regions will “implode” if more action is not taken quickly.

The government is now thought to be looking at emergency support for the estimated 3.3 million people who had been working in Italy's shadow economy, and have now been left with nothing.

Italy's health “emergency is also an economic and social one,” Conte said in a nationally televised address.

Many of Italy's small businesses, such as restaurants and cafes, are not expected to be allowed to resume operations for many more months.

Media reports suggest that bars and nightclubs will be the very last businesses allowed to reopen nationally.

Health Minister Roberto Speranza warned on Tuesday that despite an encouraging drop in fresh cases being admitted to hospitals, “we are in the middle of a battle, and the only weapon we have is social distancing, respect for the rules.”


“We mustn't think we've won. The situation is and remains serious, it cannot be underestimated.”