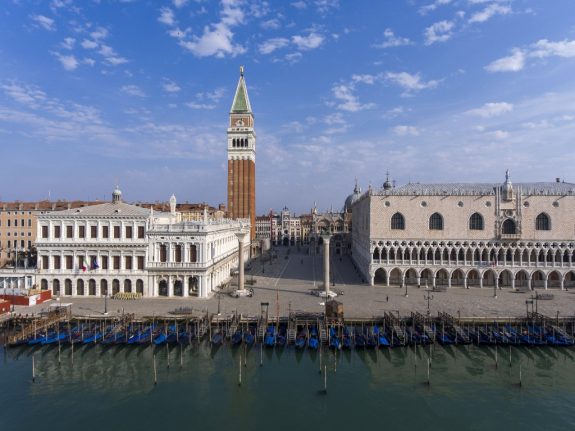 This article is now out of date. Please find the most recent updates on travel to Italy here.

Italy has now moved into phase two of its lockdown measures, and some rules are gradually being loosened

But many restrictions remain. Italian authorities have not yet indicated when it might be possible for tourism to resume.

READ ALSO: What are the rules on travel around Italy during lockdown phase two?

Health experts have warned people not to expect to be able to travel as normal in Italy this summer, and Italy's tourism secretary Lorenza Bonaccorsi said earlier this month that 2020 might as well be “written off”.

However, claims that Italy has closed its borders to foreign visitors until 2021 are false. There is no such rule in place, and the Italian tourism minister has repeatedly stressed that the country aims to welcome visitors as soon as it's safe to do so.

Will we be able to travel to Italy this year?

Unfortunately, we just don't know yet as the Italian government hasn't said when rules affecting travel will be lifted.

While nothing has been officially confirmed yet, it does look likely that only domestic tourism will be allowed this summer.

Italy's culture and tourism minister, Dario Franceschini, has suggested that only Italian residents will be taking holidays in Italy in the coming months.

“We are making a strong investment in domestic tourism, because this will be a summer of holidays in Italy,” Franchescini said in an interview on Wednesday morning.

Under current rules, no travel is allowed.

As Italy moves into “phase two” of its lockdown measures some rules will gradually be loosened over the following weeks, though movements will still be restricted.

But it is not yet known when Italy's residents will be allowed to travel freely within the country, or even in their own region.

International travel is not expected to be allowed to resume until “phase three” begins. And at the moment it's not known how long the second phase, which hasn't even started yet, may last.

Q&A: What are Italy's new rules under lockdown phase two?

Some Italian medical experts have warned that we can expect “a summer without travel”.

“The second phase will continue for a long time. We must not think that we can return to normality in July or August,” said Alessandro Vespignani, an expert on epidemiology and the spread of disease, in a television interview on April 16th.

What's the situation in Italy at present?

At the moment – and this will continue until at least May 18th – travel into and within Italy is heavily restricted.

Hotels are closed. Museums may be allowed to reopen from mid-May, and bars and restaurants could be allowed to open their doors from June 1st, according to the latest government decree announced on Sunday.

Under Italy's “phase two” of lockdown, from May 4th the rules on travel within regions will be relaxed slightly. But movement to and within Italy will remain limitied to emergencies, work and health reasons.

It is not yet known when people will be allowed to travel freely within their own region, never mind from one region to another.

A summer without trips to the beach is unthinkable in Italy, and owners of private beach clubs and lidos are now scrambling to find ways to enforce social distancing on the beach in the hope that they might be able to reopen at some point this summer. A resident waves from a near-empty St Mark's Square in Venice on April 28th. Photo: AFP

While Italy has not technically banned foreign visitors from coming, and most Italian airports are actually still open, a number of things make travel to and from the country almost impossible.

A long list of airlines have cancelled some or all of their flights to Italy, and cruise ships are banned from offloading passengers at Italian ports.

Some of Italy's neighbours, including Austria and Switzerland, have placed heavy restrictions on travelling across the borders.

Rome has closed Ciampino airport and one terminal Fiumicino airport due to a lack of demand and many of the country's long-distance and intercity trains have been suspended.

READ ALSO: Why are planes still flying to and from Italy during lockdown?

Italy joined the rest of the EU in mid-March in restricting all non-essential travel from outside the Schengen Zone – although the UK is exempt from this.
That travel ban is set to continue until at least May 15th after the EU Commission invited members to prolong the border restrictions.

Meanwhile, US President Donald Trump has imposed a travel ban on all 26 EU nations in the Schengen zone.

Incoming passengers must spend their first two weeks in Italy in mandatory quarantine – and they must be able to tell police on arrival exactly where they'll do so and how they'll get there without using public transport, which is off-limits to people entering from other countries.

And once inside the country, moving from one area to another is allowed only in emergency situations. Anyone leaving the house must fill out a form explaining their reason for doing so and declaring that they have not tested positive for Covid-19. Anyone found to have made a false declaration on their form can face a fine of up to 3,000 euros (or more in some regions) and potentially even a prison term.

Most Intercity and high-speed trains in Italy have been cancelled, and local public transport within cities runs on a reduced schedule.

Can I travel to return home if I have residency in Italy?

If your permanent residence is in Italy and you are currently out of the country, you may be permitted to travel in order to return for reasons of “absolute necessity”. See this official Italian government FAQ for further details on travel to, from, and through Italy (in Italian.)

Travellers will need to bring the relevant documents proving they are resident in Italy, and to complete a form (autocertificazione sui motivi del viaggio, available to download here) detailing their journey and giving their Italian address, to be checked by police upon arrival in Rome.

An Interior Ministry spokesperson states that all travellers are advised to contact their embassy for confirmation that they can travel before they attempt to make the journey.

Practically speaking, it may be quite difficult to make the journey depending on where you're coming from.

National carrier Alitalia is still operating some flights between Italy and other European countries for repatriation purposes.

Anyone arriving in Italy from abroad will not be permitted to use public transport on arrival, and will be required to self-isolate for 14 days upon returning home.

If you're within Italy however, you're not permitted to travel from one region or town to another to return home. People are only allowed to travel to or within the country for emergency and health reasons, or for work.

What about travel to Italy after May 18th?

The Italian government has not yet given any details of future plans to lift travel restrictions to or within the country.

The restrictions on some of Italy's international borders were not put in place by Italy but by neighbouring countries, so that is not under Italy's control.

Airlines continue to suspend flights to Italy, and are not likely to resume their usual schedules until demand for tickets resumes.

It is not yet known if Italy will in future put any restrictions on visitors arriving from certain countries.

There is particular concern about rhe UK, which has recorded the highest daily death toll in Europe..