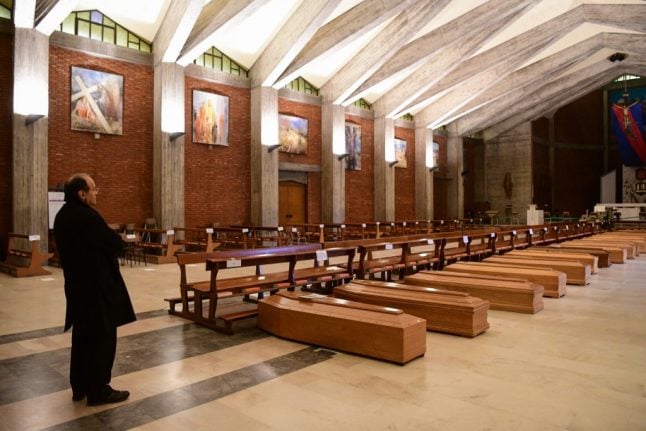 Last month dozens of coffins were stored in the church of San Giuseppe in Seriate, near Bergamo, Lombardy. Photo: Piero CRUCIATTI / AFP

Where dozens of coffins once stood, nothing but flowers are left to be seen in a photograph tweeted by mayor Giorgio Gori that symbolises the easing of a crisis that has killed over 23,000 people in Italy.

Bergamo is in the wealthy northern region of Lombardy, which accounts for over half Italy's virus victims.

Italy's coronavirus emergency czar Domenico Arcuri said on Saturday that five times as many people had died in the region during the epidemic than had been killed in Milan during World War II bombings.

“We are living through a great tragedy, which we have not yet overcome,” he said, describing the nearly 12,000 Lombardy dead as an “astounding” figure.

Over 90 percent of Saturday's new coronavirus cases in Italy were in Lombardy, the civil protection agency said.

As local morgues failed to cope with the number of deaths in Bergamo, the country's worst-hit city, the Italian army was brought in last month to take dozens of coffins to churches and then to crematoriums in neighbouring cities. Pallbearers bring the coffin of a deceased person to be stored in the church of San Giuseppe in Seriate, near Bergamo, Lombardy, on March 26, 2020, during the country's lockdown following the coronavirus pandemic. Photo: Piero CRUCIATTI / AFP

'Blink of an eye'

Gori said the death toll in Bergamo was much worse than officially recorded.

Some 795 Bergamo residents died in the six weeks since the start of March, 626 more than the average toll in the same period over the past ten years, he said last week.

Only 272 people were officially recorded to have died of the virus in Bergamo, as Italy logs deaths in hospitals but not in homes or assisted living facilities.

The epidemic has been slowly on the decline, with the number of intensive care patients in Lombardy falling below the 1,000 mark for the first time in a month Friday.

Many are urging the government to lift strict restrictions imposed for the country's two-month lockdown, which is due to expire on May 4 and has been crippling the economy.

But Arcuri said it was “blatantly wrong to talk about a conflict between health and economic recovery”.

“Without health and safety, economic recovery would last like the blink of an eye,” he said.

And the WHO's Italian government adviser Walter Ricciardi insisted a second wave of the virus was “not a hypothesis, it is a certainty. “That's why it is very important not to speed up the reopening,” he said.

Despite the warnings, some flouted the lockdown. The interior minister said it had caught 8,200 people breaking rules, including social distancing, aimed at preventing the spread of the virus Friday.

And in Saviano, a town near Naples, hundreds of people — including local law enforcement officers — thronged the streets on Saturday to pay their respects to their mayor, a doctor killed by the coronavirus, Italian media reported.