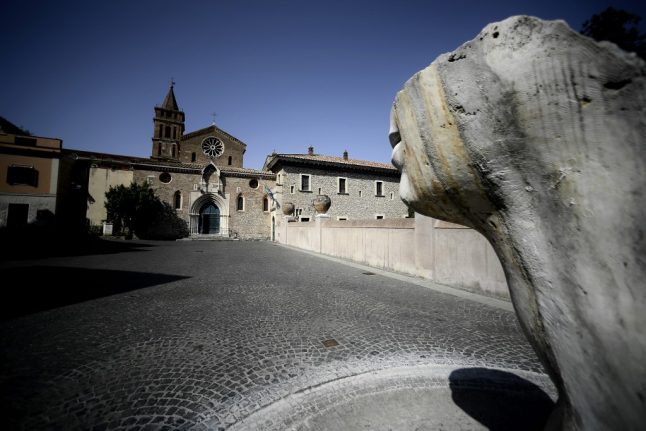 The deserted entrance to Villa d'Este in Tivoli, which usually attracts thousands of visitors a day. Photo: Filippo Monteforte/AFP

The Villa d'Este, about an hour's drive from Rome, is a 16th-century marvel, a villa and park filled with ponds and manicured gardens first commissioned by a cardinal.

Every day, nearly 2,000 people used to stroll along its paths, marvel at its Renaissance sculptures and take in the views from the terraced hillside.

But it has been closed, along with almost everything else across tourist-friendly Italy, since the first half of March because of the coronavirus pandemic. The estate's director sounds a philosophical note as he rides around the hillside park on a golf cart, a blazing sun and azure sky his backdrop.

“In our present situation, beauty contributes in a fundamental way to our wellbeing,” Andrea Bruciati says. “I feel an immense sadness that this beauty cannot be shared right now with the people.”

Bruciati is touching on something Italian scientists are growing increasing anxious about — the psychological impact of Italy's near-total shutdown.

READ ALSO: Why our readers say Italy's lockdown must continue despite 'financial strain and heartbreak'

Scientists are reportedly pushing the Italian government to start conducting psychological tests on segments of the population to see how well people are holding up.

Bruciati believes everyone would feel a lot better if they were allowed to visit his gardens.

“Nature gives us a very important message, a message of rebirth, of regeneration,” he says. “It allows us to continue moving forward despite the tragedy.” There are actually two Unesco-listed villas in Tivoli, a town northeast of Rome: Villa d'Este and Villa Hadrian, which contains ruins from the times of the Roman emperor who ruled from 117 to 138 AD.

Both are closed, and the town's mayor sounds despondent.

“We have no visitors now, none! Zero! Zero!” Giuseppe Proietti tells AFP.

READ ALSO: Will Italy's tourism industry ever fully recover from the coronavirus shutdown?

Local sources of income have dried up, and no one really knows when the tourists will dare return to Italy, whose 23,660 virus deaths are the most officially recorded in Europe.

“The restaurants, the historic centre… The squares filled with outdoor restaurants are all completely closed,” the mayor says. Tourism is vital to Italy's economic survival, employing just under a fifth of the entire official workforce.

Few places feel the impact of its sudden end as deeply as the small towns built around catering to tourists' universal desire to sit in historic squares, eat, drink and enjoy.

“They are not closed because of the law — they are closed because there is no demand,” Conversi says. “We are trying to understand how we will last [until the end of the tourist season] in October.” At Villa d'Este, Bruciati says he sees no clear way out.

Instead, he wants to use whatever resources are left to make the town and its parks look as good as possible for the day the tourists are back.

“The villa is suffering,” he says. “But at least we are trying to improve it for future visitors.”