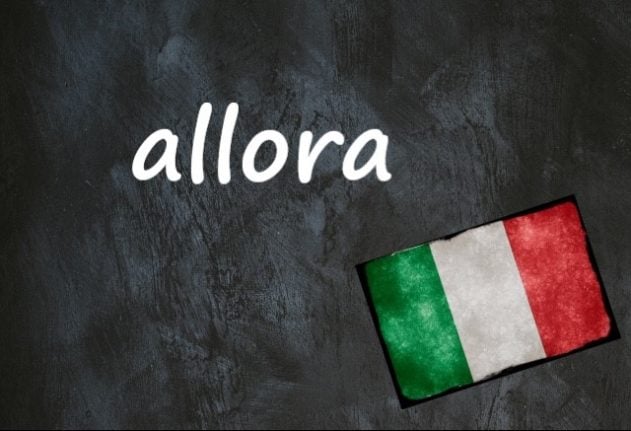 More people have asked us to feature allora than any other word so far. Probably because you've heard it in just about every other sentence uttered by Italians.

What is this word they turn to so often? It must mean something really important, right? Well, at the risk of disappointing you, allora means, quite simply, 'then'.

But of course, no word is quite as simple as it seems. Think about all the multitude of meanings 'then' can have in English: allora works the same way.

Firstly there's the 'then' that indicates 'at a certain point in time'.

Allora abitava ancora a Londra.
Back then she was still living in London.

l'allora presidente
the then president (the president at that time)

The time you're referring to can be in the past or the future, so as well as 'back then' allora can also imply 'after that' or 'next'.

Quando vedrai, allora capirai.
When you see, then you'll understand.

Se vuoi venire, allora preparati.
If you want to come, then get ready.

Fa freddo, allora mettiti una maglia.
It's cold, so put on a sweater.

Il film era noioso e allora siamo usciti.
The film was boring and so we left.

Not forgetting the 'then' that's just a useful linking word, to help you introduce an idea, connect back to another, or simply launch your sentence.

Allora, cosa facciamo stasera?
Well then, what are we doing tonight?

You can even use it as a question all on its own, to signal to the other person that you want to hear more.

Allora? Com'è andata?
So? How did it go?

That's why allora can be tricky to pin down: because if you ask an Italian speaker why they said it, half the time the answer would be: “I don't know, I just did!” File it along with those other handy words such as quindi, insomma and cioè that you can reach for while you're still thinking about the rest of your sentence.

That's what US comedian Aziz Ansari's character discovers when he moves to Italy in the series Master of None: we can't recommend his pronunciation (make sure your tongue touches the top of your mouth for those two lovely Ls!), but we do give him full marks for enthusiasm.

Do you have a favourite Italian word, phrase or expression you'd like us to feature? If so, please email us with your suggestion.