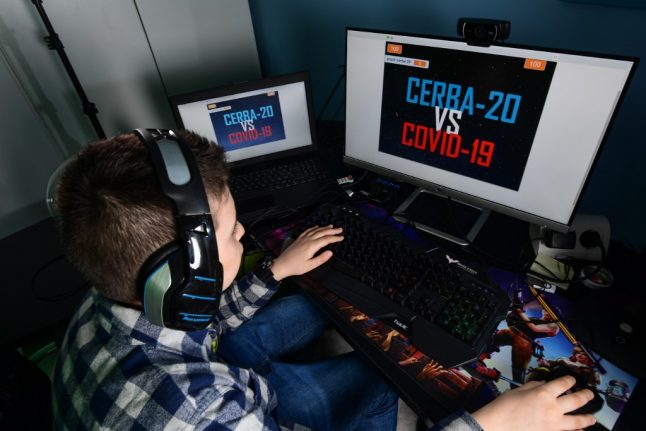 The fourth-grade pupil from the outskirts of Milan, where residents have been living in lockdown since March 8, has used his time to create a video game to play with his friends.

“I had to stop all the sports I played because of COVID-19,” he says.

“I can't even go to the pond with my dog. Instead of playing sports — skiing, swimming and karate — I have to make do with an exercise bike.”

That led Lupo to turn his attention to programming, a passion that he shares with his father Marco, a business manager.

He took some online tutorials and got to work on building his game — Cerba-20.

The aim of the game is a fairly typical 'seek and destroy' with lasers, except in this case, the player is in the captain's chair of the Cerba-20 spacecraft and the enemy is, that's right, COVID-19.

Lupo explains that he plays with his friends and that he now intends to set up a project to teach them how to programme.

“He also receives requests from his teachers to programme something useful, not just games,” says his father.

Many parents with children who have been gorging themselves on video games during lockdown might be concerned by Lupo's new interest..But his mother, a lawyer, dismisses such anxieties. “I'm not worried because my son is not a 'nerd',” says 44-year-old Francesca Zambonin, who is just “happy because he is passionate about something that can help him.”

“The fact that he invented a game that has gone viral makes me happy because it motivates him to do even more.”