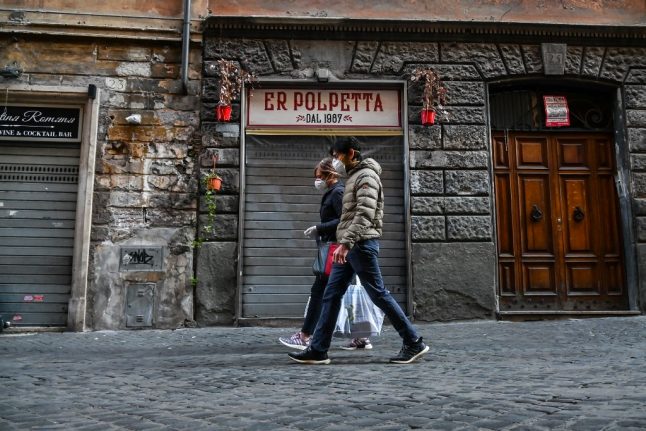 “Now is the time to coexist with the virus.”

“It’s fundamental for each and every one of us to be responsible, we must never approach each other, the safety distance must be at least one metre.”

Conte's government has decided to gradually loosen the national confinement measures, on May 4th and May 18th.

“We’re going to ease the lockdown from May 4th but there is a system in place which integrates the regions,” he said.

Each region “will have to inform the health ministry on the progress of the epidemiological curve and on the success of the measures.”

The central government’s measures are also subject to be approved and implemented by regional authorities.

Here are the main points of Italy’s next set of lockdown restrictions:

Visiting relatives close by is allowed

From May 4th, Italians can visit relatives as long as they take precautions and under no condition should there be large gatherings or parties, Italy’s PM announced.

It will be possible to move from one municipality to another but the ban on travel between different regions of Italy continues, except for proven work matters, health reasons and extraordinary circumstances.

“VAT on masks will be scrapped in a forthcoming decree.”

From May 4th, people in Italy will be able to exercise outdoors without restrictions or police checks (at any distance from home) as long as they follow social distancing of at least one metre.

“From May 4th, we will give the go-ahead for take-away at restaurants,” Italy’s PM explained.

“We must go in one at a time and the food has to be consumed at home”.

“Businesses concerned are allowed to reopen under the assumption of compliance with the security protocols.

“There will also be safety measures for the transport companies.”

Conte also gave the green light for funerals to have up to 15 people attending, but they can only be close relatives and all of them must wear masks and maintain social distancing. No other ceremonies or gatherings are permitted.

Masks must be worn on public transport

The loosening of Italy’s lockdown goes hand in hand with the adoption of strict safety measures, especially in terms of the mandatory use of face masks on all public transport, Conte confirmed on Sunday’s TV announcement.

Face masks or other cloths or scarves must be worn over the nose and mouth and may also be made of fabric.

Anyone with a temperature must stay at home by law

Everyone with a fever of 37 degrees or more must stay at home, Italy’s government has decided, whereas before it was a recommendation and not a legal obligation.

Buses, metro services and other public transport in Italy will have a maximum number of passengers set during peak traffic times to respect the distance of one metre between people.

There will also be markers added to seats to indicate those that cannot be used.

Shops and cultural sites to open on May 18th

On May 18th, the reopening of all shops as well as “exhibitions, museums and cultural sites will be allowed if May 4th’s loosening of restrictions prove successful.

Bars, restaurants and hairdressers may open on June 1st

The lockdown will continue for bars, restaurants, hairdressers and beauticians until at least June 1st.

What will come next?

An update is expected in mid-May.

Schools will not reopen until September, Conte said earlier on Sunday.

Hugs and handshakes will still be discouraged and a decision to restart Italy's beloved Serie A football championship has been postponed.

Italy was entering an era “of responsibility and coexistence with the virus”, Conte told the nation in a televised address.

“Before phase three, we need to wait for a vaccination, and for new contagions to reach zero,” he explained. “For now, we need to live with the virus.”
Conte's announcement followed a frantic week of talks with regional and business leaders aimed at deciding how the nationof 60 million will come out of its most traumatic experience since the second world war.

Italy's official coronavirus death toll of 26,664 is Europe's highest, and only second globally to the United States.

But the number of cases has been ebbing and Italy believes its contagion rate – reported at between 0.2 and 0.7 – is low enough below the key threshold of 1.0 to try and get back to work.

In his address, Conte urged caution and unity.

“We can get angry and look for a scapegoat – the government, the press – or we can try to resolve the situation together, working as a team.”

“If the curve rises during phase two, we need to respond rapidly.”

“If we don't respect the rules the curve will rise again, deaths will increase and there will be irreversible damage to our economy.”

“If you love Italy, keep your distance from others.”