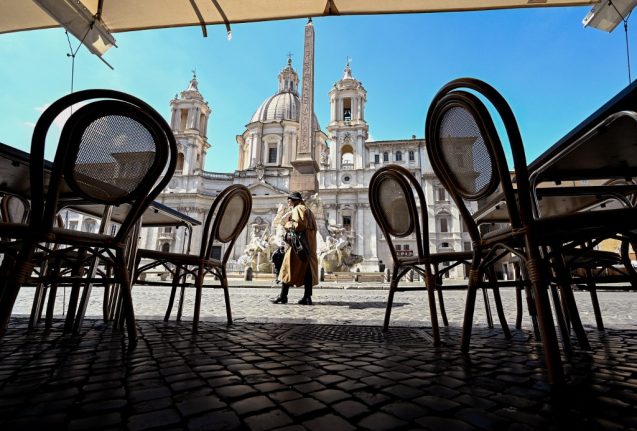 Italy, home to the eurozone's third-largest economy, has been hard-hit with almost 28,000 deaths due to the virus, with the economy shrinking 4.8 percent in the first quarter compared to a eurozone average of 3.8 percent.

Italy was the first country in Europe to be hit by the pandemic, in particular its economic heartland in northern regions Lombardy, Veneto and Emilia-Romagna.

Together those regions represent 45 percent of Italy's GDP, driven by exports including cars and luxury goods.

On Thursday, Prime Minister Giuseppe Conte told parliament that the government was revising down its economic forecast with a budget deficit increased by 55 billion euros ($60 billion) and a series of aid measures, including 25 billion euros for employment and income support and 15 billion euros for businesses.

The new budget forecasts a GDP contraction of eight percent this year overall, although it hopes the economy will begin to bounce back beginning in the third quarter.

However Conte warned that if the virus impact persisted the recession could be up to 10 percent of GDP, indicating the “gravity of the situation”.

The International Monetary Fund's latest prediction for Italy's economy this year is a contraction of 9.1 percent.

In the first quarter of this year the economy shrank by 4.7 percent compared to the previous quarter, the national statistics institute Istat said on Thursday.

The official drop in unemployment in March of 0.9 percentage points to 8.4 percent is misleading as it only takes into account those actively seeking employment and not those who have stopped work because of the lockdown.

In March, the number of people not working rose by 2.3 percent, Istat said.

Ratings agency Fitch on Tuesday lowered its rating for Italian debt to BBB- with a stable outlook, predicting a recession this year of eight percent.

Italy's Finance Minister Roberto Gualtieri responded by saying that “the fundamentals of the Italian economy and public finances are solid.”

Fitch's rating drop has put Italian sovereign debt one notch about “junk”, as Moody's did already in October 2018, well before the pandemic.

Last week, the government warned that Italy's economically-punishing coronavirus lockdown, combined with big-spend stimulus packages to support families and firms, would push the deficit and public debt to dizzying heights.

The pandemic was a “black swan,” an unforeseen event beyond the norm with potentially serious consequences — without which the country's weak economy had been expected to gradually improve over the year, the government said.

S&P nonetheless maintained the country's rating at BBB, or two notches above the speculative category, citing in particular a diversified and rich economy as well as relatively low levels of private debt.

It also expected that most of Italy's new sovereign debt created by the crisis around the pandemic will be bought by the European Central Bank.

Italy's forecasts are well above the limits set by the EU's Stability and Growth Pact, which calls for deficits to be capped at three percent of GDP, and a debt-to-GDP ratio of no more than 60 percent.

But such rules have been suspended as governments scramble to contain the economic fallout and prevent mass bankruptcies and layoffs.

Italy's public deficit is forecast this year to rise to 10.4 percent of GDP. That is a mammoth leap from the 2.2 percent expected before the pandemic hit, and the 1.6 percent recorded in 2019.