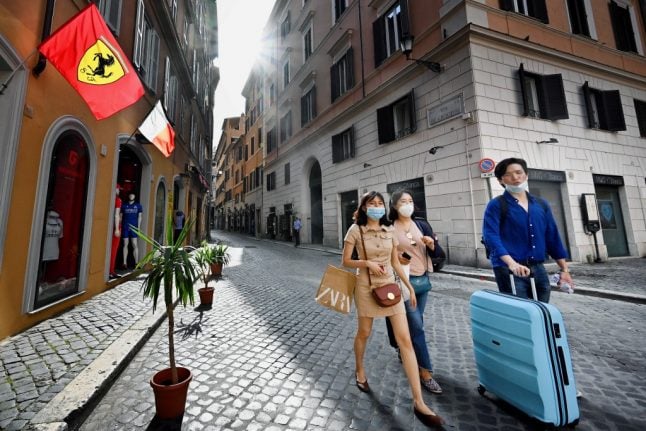 Tourists walking in central Rome on May 18th, as many of Italy's lockdown rules were lifted. Photo: Alberto Pizzoli/AFP

Italy's tourism sector, and its economy as a whole, has taken a major hit as visitors stay away this year due to the coronavirus outbreak. Huge losses were reported as travellers cancelled their bookings even before Italy shut down in early March, when all but the most essential travel to Italy became impossible.

The resulting economic hit to one of the world's most-visited nations is profound. Tourism employs an estimated 4.2 million people in Italy – just under a fifth of the entire official workforce. The tourism sector accounts for 13 percent of Italian GDP.

Up to 60 million foreign visitors came to Italy annually in the past few years, and until the coronavirus outbreak, that figure was only expected to keep growing.

With Italy now planning to restart tourism in June, many hope this will be enough to keep tourist businesses afloat. But will visitors return in the same numbers? And if so, when?

Giorgio Palmucci, President of Italy's National Tourism Agency (ENIT), told The Local that hundreds of thousands of people are already planning to return to Italy in the second half of 2020 – with Brits and Americans leading the charge.

“At the moment there are 300,000 reservations, a provisional figure which we hope will keep growing,” he said.

While travel within the EU, including to and from the UK, is allowed from June 3rd – with no quarantine requirements – there's still no confirmed date from which tourism from outside Europe will be possible.

The EU's external borders are currently closed to non-essential travel until at least June 15th. But once it is possible to travel again, Palmucci expects “a rapid recovery of international tourism from distant markets, especially in the States.”

“Flights [between the US and Italy] have already been announced by some companies such as Alitalia for example,” he said, adding that last year, Italy had 4.4 million visitors from North America, a figure which had increased by seven percent year on year.

READ ALSO: Will Italy's tourism businesses ever fully recover from the coronavirus shutdown?

“For the European market, the British are expected to be among the first to restart tourism into Italy,” he said.

Italy had 6.4 million British visitors last year – an increase of 6.3 percent on the previous year, he said.

Though there has been a lot of attention focused on airports reopening and flights resuming, Palmucci pointed out that air travel accounts for “only a part” of international arrivals, with “over 50 percent of foreign visitors arriving by car.”

The ban on interregional travel was lifted on June 3rd, the same day as European travel was allowed again. With italians also avoiding holidays abroad this year, Palmucci expects this will mean the already-large domestic tourism market will grow. “Normally Italian tourism is split, with 50 percent foreign tourists and 50 percent Italian visitors,” he explained. “An increase in domestic tourism is expected this year, which will dictate the first signs of recovery.”

As for more long-term changes to the industry, Palmucci said we can expect tourism in Italy to become “greener and slower”.

“Post-Covid crisis, there will be an opportunity to tackle the issue of sustainability and a new way of proposing and experiencing tourism,” he said.

Many Italian residents, visitors, and even those working in the travel industry say now is the time for change, with many of Italy's tourism hotspots famously struggling to deal with overtourism in recent years.

Palmucci described the relaunch of tourism in Italy as “an opportunity for all operators in the sector to raise quality standards, and to carry out the renewals and adaptations that the sector requires, with the advance of innovation and environmental policies.

He added that “many areas which had to deal with overtourism will have the opportunity to direct these flows into lesser-known areas.”

While Italian tourism may look somewhat different in future, Palmucci predicts that, in economic terms at least, it may not take too long to get back to where it was last year.

Whether Italy's hotels, restaurants, and other tourism-focused businesses will be able to survive until then remains to be seen.

READ ALSO: 'This won't be a normal summer': How the EU hopes to save the holiday season