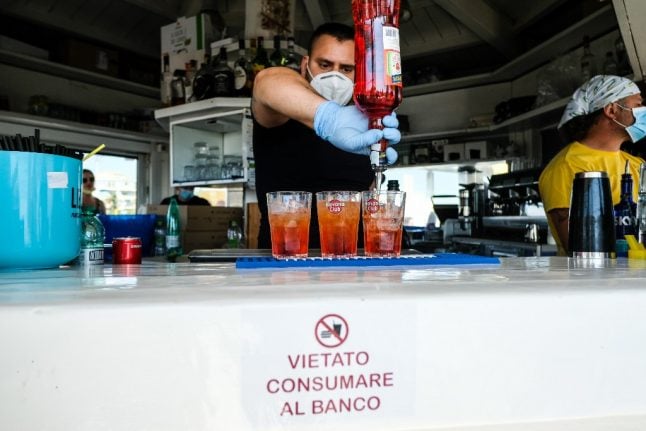 A barman prepares cocktails to take away by a sign reading "no eating and drinking at the counter". Photo: AFP

Bars, cafes and restaurants were allowed to reopen to the public in Italy from May 18th, with Prime Minister Giuseppe Conte warning: “It's not the time for parties, nightlife or gatherings. During this phase, more than ever it's fundamental to respect distances and wear masks, where necessary.”

But over the past week, Italian media has been full of reports of crowds gathering at nightlife areas in cities from Palermo to Milan.

Angry officials, fearing a second wave of infection, first pleaded with people to stop. Then they promised to crack down, and said the current travel restrictions may be extended.

But some question just how bad the problem really is.

As with so many things in Italy, it depends on which part of the country you're in. There's obviously more nightlife in big cties than in small towns, but readers report that some cities are much livelier than others.

My own city, Bari, in southern Italy, is never a particularly quiet place. So I wasn't really surprised to see that, every night since rules were lifted on May 18th, there have been crowds outside many cafes and bars, in central piazzas, and particularly on the lungomare: the walkway along the seafront.

Some bars and cafes, particularly smaller places, are only open for takeaway or outdoor table service, with owners concerned about whether they can actually enforce the rules and not wanting to risk fines of hundreds of euros.

The rules vary by region, but generally tables are supposed to be spaced apart by one metre or more, and masks are required inside bars, cafes and restaurants unless you're sat down.

While the crowds mainly gather in the evening, there's very little social distancing at any time of day and plenty of people spilling out of cafe doorways in the morning, too.. A lot of people wear masks, but not always over their faces. A customer carries drinks outside a bar in the Ponte Milvio district of in Rome on May 21st. Photo: AFP

But is it the same all over the country? When I asked Twitter on Tuesday what the situation was like around Italy, here's what people said:

“In Bergamo on Saturday there was a big security presence stopping people from loitering in big crowds. The centre of town was very busy at the weekend, but people seem to be trying their best to stick to the rules.”

“Verona was fairly packed with folk out for an aperitivo. Little respect for social distancing rules/use of masks.”

“Catania so far is keeping a semi-orderly state. Most people have masks, not that they wear them properly. About 50 percent of the bars/restaurants have reopened and doing the minimum with protective measures. It's people in the streets that are too close, careless.”

“Very orderly in my Rome suburb but in the evenings there are crowds of young people practising social closeness in the piazza.”

Rome residents also said the situation is completely different from one part of the city to another, with some piazzas standing empty while others were crowded, and some bars enforcing the rules far more strictly than others. So why are these crowds gathering? Are people out celebrating the end of lockdown? Not really. My impression is that they're just doing what they'd normally be doing on a warm evening in late May, if a bit more enthusiastically after two months shut indoors.

This week, much attention in the Italian press has been focused on the “movida”, a slightly retro word, borrowed from Spanish, sometimes used to describe Italy's summer nightlife.

Rather than meeting up with friends at a bar or beer garden as we do in some countries, in Italy it's far more common to just meet at the piazza or seafront, or to go for a walk around town, perhaps getting a drink or an ice cream on the way, enjoying the cooler air after a hot day and stopping to chat with people you meet.

People aren't suddenly gathering in groups because lockdown has ended: this is just what summer evenings look like in Italian cities at this time of year – albeit usually without the masks.

And it doesn't seem as though people believe the danger has passed, either.

“We can't stay inside any longer. We need to get out and restart our social lives,” said 17-year-old Francesca, who spend Saturday night with a group of friends on Bari's seafront. “We're wearing masks, we're not drinking or causing problems. I think most people are following the rules.”