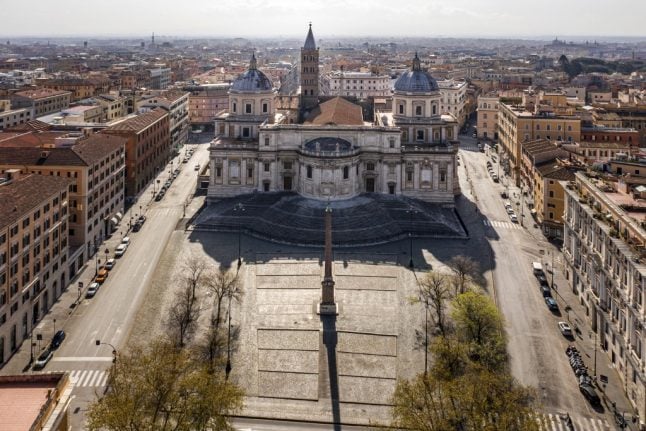 I own an apartment in Esquilino, Rome, and my building had been scheduled for an exterior renovation before Covid-19 hit. My architect sent me a request for an urgent consultation. The project is big, and I have to pay for 20.5 percent of it, so I had an urgent reason to get there.

I bought a ticket from New York's JFK airport to Rome Fiumicino at the beginning of May. That flight got cancelled. When I called Alitalia they said I could enter Italy from Paris, so they moved me to an Air France flight on a different day. Then that flight was cancelled.

After having several flights to Italy cancelled, I called Alitalia and the man said they were now not running any flights between New York and Rome in June.  He changed my return to July 1st at no cost.

I knew I would have to quarantine, so I made plans to stay in Rome for five weeks, despite living on a farm in the US and it being the busiest time of year there. There is something completely addictive about Rome. Being there was more important than my peas, lettuce, spinach and baby carrots.

I called the Italian embassy in New York to confirm that I had the proper documents to go back to Rome. Everything I'd read online was repeated to me by a human: no travel unless it is for health, work or urgency.

I was able to check-in online, and even had the possibility to upgrade to La Premiere, Air France's First Class, for a reasonable price. The plane was virtually empty. I brought my letter of urgency, had downloaded the form to enter Italy, printed a boarding pass for Air France, and dragged a giant suitcase of things for my home in Rome.

I arrived at JFK and it looked post-apocalyptic. JFK dwarfs FCO. There were probably twenty people in line for the Air France flight to Paris. All the other flights on the board had been cancelled.

I went to check in at La Premiere. It has its own entrance and they greet you by name. The woman asked me for my Italian passport, permesso di soggiorno (residency permit) or original marriage certificate to an Italian. None of these requirements had been online or needed according to the Italian Embassy.  I had paid a ton of money, been super-stressed for the whole month prior to departure, and the woman told me to go home! An Alitalia flight comes in to land at Rome's Fiumicino airport. Photo: AFP

I was stunned. I stumbled back to my husband, hauling my giant suitcase. He was still on the curb in the car, awaiting bad news.  He insisted I find another person and press my case.

Walking back in through another door, I found customer service. Different woman, different attitude. She asked me if I owned property in Rome. I told her of my home in Esquilino. She asked me if I was willing to quarantine, which I already knew was necessary. Of course I said yes.

She made a quick call, gave me two new forms to fill out (not needed in the end), and took my suitcase! Because I owned property in Italy, I was allowed to go to Rome!

I was hassled a bit in Paris over my American passport. I had to fill out yet another form before the flight to Rome. Alitalia didn’t provide anything on the plane, not even a bottle of water.

When I arrived at Fiumicino, two security men looked briefly at my papers when I got off the plane. Before the baggage carousels, there was a very long queue and policemen at tables. There was yet another form to fill out. No tables or chairs, no pens, or boundaries marked for distancing. It was complete chaos, but I managed. I met with a policeman, and showed him my passport and the newest form.

He didn’t care at all about my letter of urgency. He asked if I lived in Rome. I said yes, because I do a good part of the year.  He told me to call ASL (Italy's health service, the azienda sanitaria locale) and was very relaxed.

I got my bag, got a taxi, and got to my apartment!

I sit on my balcony listening to the subdued noises of the city I love so much. Amazon Now has been great for food. I’m happy in a quarantine because it is in Rome.

ASL calls me every morning to check on my health (which is fine), obviously in Italian. Today the woman asked for my place of birth and codice fiscale (tax code) as my quarantine ends tomorrow night.

I really wanted to be here, so I jumped through all the hoops. But until Italy says it wants American tourists, I don’t expect to see much travel from the US. What I endured was extremely stressful, and most of it was unnecessary.  The information online is discouraging and confusing for travelers. Americans who dream of a vacation in Rome, but do not own property, have no way to get here now.

Would you like to write a guest post for The Local? Send your ideas to the editor here.