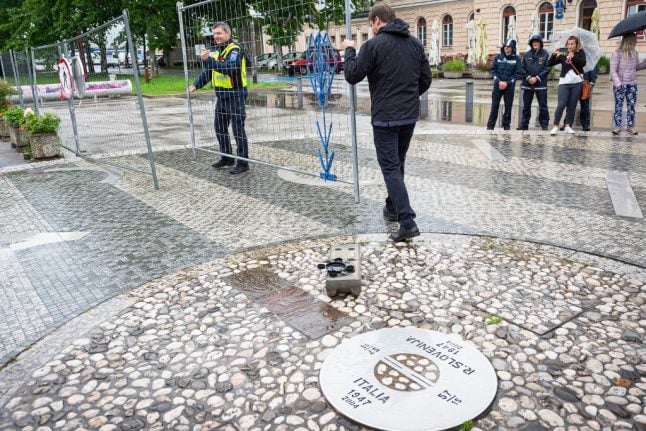 The border fence between Italy and Slovenia was taken down on June 15th. Photo: Jure Makovec/AFP

The mayors of Gorizia in Italy and Nova Gorica in Slovenia cut a symbolic ribbon and hugged each other across the border to mark its full reopening.

“This is a symbolic day. Both Goricas have overcome the epidemic… and proved they share a common reality, unity,” Nova Gorica Mayor Klemen Miklavic said before removing a section of fence on Europe Square.

“We are like a table with four legs, two are in Italy and two in Slovenia. If we lose two legs, the table can't stand anymore,” added Gorizia Mayor Rodolfo Ziberna. The fence was installed by Slovenian authorities in March after the country closed its borders, and was particularly symbolic as it ran along a part of the old Iron Curtain and evoked unpleasant memories among older residents.

The original “Gorizia wall” only came down in 2004, the year Slovenia joined the European Union, and since then the town has experienced extensive integration, with residents crossing the border daily to shop, commute to work or go to school.

The border closure in March was particularly disruptive for town residents, but neither Rome nor Ljubljana were prepared to give much leeway.

Ziberna said local co-operation had remained excellent, however. “We believe this is a model of collaboration we could export to all of Europe,” he said. After declaring the end of the epidemic last month, Slovenia has eased travel restrictions with its neighbours. The border with Italy — one of the countries hardest hit by the virus — was the last to come down, and people were finally allowed to cross into Slovenia on Monday with no restrictions.

Italy has recorded almost 4,000 cases per million inhabitants, while Slovenia has had just over 700. With a population of around two million people, Slovenia has registered just under 1,500 Covid-19 infections and 109 deaths, while more than 34,000 people have died in Italy.

Slovenia now allows restriction-free travel to 19 European countries, though controls remain in place for those arriving from Britain and Sweden among others.