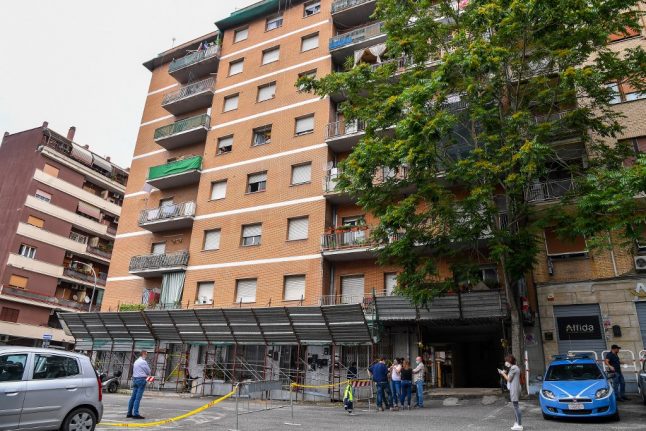 Police tape off an apartment building in southern Rome where several cases of coronavirus were detected. Photo: Tiziana Fabi/AFP

Yellow police tape — a familiar sight across Italy since the coronavirus began sweeping the country in March — reappeared at the weekend outside a Rome squat where around 15 new cases have emerged.

A second outbreak was far bigger and occurred at a hospital on the western edge of Rome, with 109 cases and five deaths.

Health workers insist the outbreak among squatters is under control, at a time when Italy is cautiously relaxing measures to contain the disease that has claimed more than 34,000 lives.

Rome's regional Covid-19 crisis centre said all those who tested positive for the virus at the illegally occupied building had been transferred. All their contacts were identified and 108 tests were carried out.

After the uproar of blaring ambulances to handle the new cluster of cases, the southern working-class district of Garbatella returned to normal on Sunday, apart from the police tape and a squad car outside the building, as well as a posse of journalists. Mask-wearing shoppers could be seen buying groceries, a man walking his dog, another throwing garbage into an overflowing bin.

“Occupants who are still in the building are confined there,” a police officer told AFP, adding that the Red Cross was delivering food to them. The squatters receive aid from an NGO. Many of the windows were shuttered in the orange brick block of flats, typical of the buildings that sprang up in the outskirts of Rome during the 1970s.

An employee at a nearby grocery store who gave his name only as Ion said the inhabitants were both South American and Italian, “working people, mainly families”. He added that some of the flats share toilets.

“This doesn't worry us very much,” he said. “We're wearing masks and being careful.”

But Raffaele, a 77-year-old who lives nearby, complained that “there is absolutely no check [on] constant comings and goings of people from all over the world.” He said he feared that such transience could help spread the coronavirus: “Let's say we are being very careful, we are disinfecting non-stop.”

Meanwhile two army vehicles were stationed outside the San Raffaele Pisana hospital on Sunday, but the situation appeared under control.

Health officials said rigorous contact tracing was under way, with some 200 recent patients being tested.

The two new outbreaks of Covid-19 came as Italy was re-emerging from lockdown in a phased process that began in early May.

READ ALSO: Here's what changes from Monday as Italy moves into 'phase three'

“No one had any illusions that the problems were over,” WHO deputy director Ranieri Guerra told Italian journalists. “It means the virus hasn't lost its infectiousness, it isn't weakening… we shouldn't let down our guard.”

However, the Italian immunologist added: “Such micro-outbreaks were inevitable, but they are limited in time and space. And today we have the tools to intercept them and confine them.”

Italy, which went under nationwide quarantine on March 10th, has been one of the hardest-hit countries in the world by Covid-19, mainly in the northern region of Lombardy.