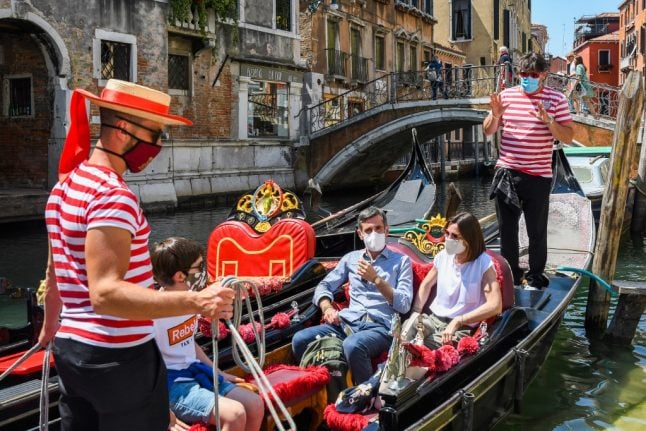 It hasn't taken long for visitors to return to Venice after Italy reopened its borders on June 3rd and many of its neighbours followed suit on June 15th.

At least 16 European countries now allow unrestricted travel to and from Italy, with others set to lift limitations in the coming weeks.

CHECKLIST: Which countries have dropped travel restrictions on Italy?

Some travellers are taking the chance to catch an unusually peaceful view of Venice, where around 85 percent of all tourists come from overseas.

Italy's coronavirus lockdown emptied the city of its tourist crowds – and while many residents enjoyed the quiet, for the estimated 65 percent of residents who work in tourism, the ban on visitors was tough economically.

But in recent days tourists have begun returning from elsewhere in Italy and overseas, albeit in smaller numbers. Caffè Florian, one of Venice's most famous bars, has reopened after a three-month closure. A visitor takes a selfie inside the cafe. The centre of Venice remains relatively uncrowded – for now. A souvenir seller sets out his stall. The city is likely to see bigger crowds throughout the summer. A gondola on the relatively empty Grand Canal. All photos by Andrea Pattaro for AFP.