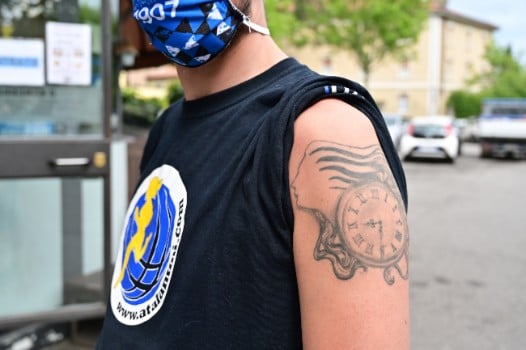 “These have been extremely difficult months,” said Mayor Giorgio Gori, remembering the dozens of coffins lined up for burial and the macabre images of the military convoys that carried them which were beamed around the world.

“March was a series of mournings, each bit of news more sad than the last.

The province suffered 6,000 more deaths than usual during the COVID-19 outbreak, including 670 in Bergamo city which has a population of around 122,000.

Almost everyone there has lost a relative, friend, colleague or neighbour.

It is now known that the Champions League match between Atalanta and Valencia on February 19 played a significant role in spreading the deadly virus.

Around 46,000 spectators gathered at Milan's San Siro to watch Atalanta crush the Spanish team 4-1. With every goal, local fans fell into each other's arms, at the stadium and in bars.

The coronavirus was already known in China but at the time seemed far away from northern Italy.

But that soon changed, and from March 4 the number of cases in Bergamo rose sharply, leading some doctors to label the football match a “biological bomb” which had exploded.

After the second leg was played and also won, 4-3, on March 10 in Valencia, Atalanta coach Gian Piero Gasperini called for a big party to be held “later” as the team made it to the Champions League quarter-finals.

There followed over two months of lockdown in Italy, and tourists are yet to return to this pretty UNESCO World Heritage Site city.

On Sunday, Atalanta take on Sassuolo in their first post-virus Italian Serie A match, to be held without fans present, but with the team known as “La Dea” resuming what was far and away their best season ever.

“But as the staff and players have said, our thoughts will be with those who have been through such difficult times,” he said.

“We're in a hurry to see Atalanta play again, given the level they're playing at,” he told AFP.

Marino Lazzarini is head of the Friends of Atalanta fan club with 6,000 members and is also one of the club's directors.

“Counting friends and others I know, I lost 40 people. Football helps us not to forget, because we don't forget, but to enjoy ourselves,” said the 71-year-old, who has been going to the stadium since he was four.

Atalanta's captain, Argentine Alejandro “Papu” Gomez, has also called for football to resume, despite the opposition of some hardcore “Ultra” fans.

“If you asked me two months ago I would have been against,” he told sports newspaper Corriere dello Sport.

“But now it's safer, that the virus appears to have weakened, I'm for it. Bergamo lives for football, breathes football. But Bergamo won't forget.”

Those who are rejoicing at the resumption of football, even behind closed doors, are desperate to know how their so-far incredible season ends.

Atalanta occupy the fourth and final Champions League qualifying spot in Serie A and sit three points clear of fifth-placed Roma with a game in hand.

“The lockdown happened at the most beautiful moment (for the team), an historic moment,” said Lazzarini. “We hope that the dream can resume.”

After their historic victory in Valencia, players showed off a T-Shirt written in the local dialect:  “Bergamo, Mola Mia” or “Never Give Up, Bergamo”.