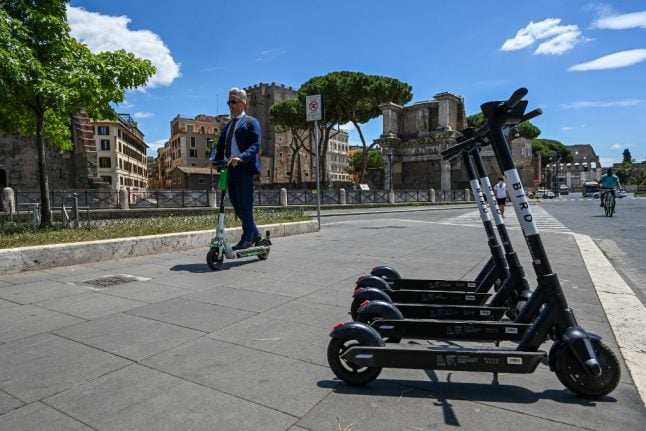 During a recent sunny weekend, thousands of users, mostly young people, slalomed through Rome's historic centre, on the road leading to the Colosseum and around the famed Piazza Venezia.

Two-wheel scooters were parked on the sidewalks, arranged side by side, or in other cases isolated on street corners, or lying abandoned in the roads.

READ ALSO: What you need to know about Italy's new electric scooter craze

For some Romans the self-service battery-run scooters, already common in other European cities, ease congestion and help people avoid packed-out public transport in times of pandemic.

For others they are messy, unregulated nuisance. “Rome is full of cars and mopeds, so it's important to use this kind of means of transport for the environment,” said Vito, a tourist visiting Rome with his family. “We are tourists, and to avoid any contact with public transport, we decided to take the scooter.”

As European cities lift virus lockdowns and reopen, many are keeping social distancing restrictions on public transport as a way to stop the spread of the virus. As people look to alternatives, bike sales are up and cities from Paris to Athens have introduced more cycling lanes, with plans for greener transport.

READ ALSO: Italy offers city dwellers up to €500 to buy a new bike

Rome was one of the last major European cities to make self-service scooters available to its pedestrians, residents and tourists. In other cities such as Paris they are well established, though often the source of debate over their benefits and drawbacks, and the question of safety regulations.

E-scooters are already present in other cities in Italy, such as Milan, Bologna, Turin and Verona. Four self-service scooter companies have been operating in the capital since their authorisation on March 1st: Lime, Bird, Helbiz and Dott. The municipality's project provides for a two-year experimental phase.

Rome's historic city centre is relatively untouched by traffic jams, but the car remains favoured means of transport in the Italian capital, which has few bike paths, and often poorly maintained roads, potholes and damaged asphalt.

Several attempts were made in the past to promote self-service bicycles, but without success, many ending up vandalised or thrown into the waters of the Tiber.

In the current scheme, a maximum of 16,000 scooters will be allowed, with the usual operating rules about speed limits and an age limit of 14 years and above. Their use remains limited for the moment in the historic centre. It is impossible, for example, to leave them parked on Vatican territory.

Rome scooter riders face another problem: the city's omnipresent cobblestones, which are difficult to avoid in the streets and alleys of the Eternal City.

And not all Romans are happy with the flood of electric scooters in the heart of Rome. According to Italian press reports, the development is already arousing protests from taxi associations, who are denouncing chaos on the streets and “non-compliance with the law”, which forces drivers to be extra vigilant because of scooter “mania”.

One local newspaper reported 14 accidents in the capital and several cases of vandalism since the scooters began flooding the city.

While most of the incidents reported involved scooter riders colliding with pedestrians, there has been at least one case of a scooter being hit by a car. Two young women, who are believed to have been sharing the scooter, were taken to hospital amid reports that they rode across the road on a red light late at night.