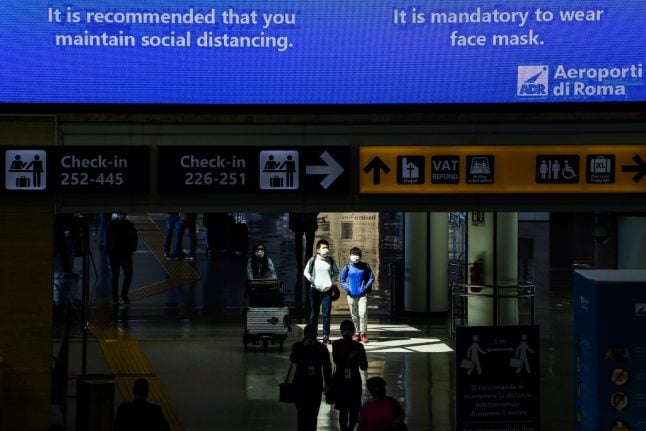 It has taken two attempts to return to Rome and just a smidge of patience, but I finally arrived back in the Eternal City on June 26th.

Of course, I was flying from within the EU – Ireland – and that certainly made things easier. Yet, at the beginning of May when I began looking for flights there were slim pickings indeed.

While both Ryanair and Aer Lingus were selling direct Dublin to Fiumicino flights on their websites, scheduled for early June, I was suspicious. A quick message to a contact within the airline industry confirmed that I was right; this was mere wishful thinking on the part of the airlines.

Primarily, a tourist route, Irish holiday makers were not going to be clamouring to book an Italian getaway anytime soon and of course the ever budget-minded Ryanair was unlikely to operate a near empty flight. Indeed, Aer Lingus had confirmed to its staff that they were not going to reopen the route until at least mid-July.

I was left feeling frustrated and facing the prospect of a long rainy Irish summer.

In the time of coronavirus lockdown, few things can be counted on, but the Aer Lingus Dublin to London route is generally considered to be sacrosanct. My plan was hatched. I would take the last bus–a 3.5-hour journey from Donegal–the night before my early morning flight to London and sleep at the airport, (alas all the airport hotels were shut). I was due to arrive in Heathrow three hours before my connection with Alitalia to Rome. Perfect.

The two flights in total were coming in at around €250, not exactly inexpensive, but just about doable. All I needed was to wait two more days to be paid before booking.

But less than 48 hours later the price of the Alitalia flight had soared to €526. Perhaps naively I had assumed demand would be low. The next available in-budget date was some three weeks distant on the 19th of June.

I would be wiser this time. I booked immediately but opted to fly out of Belfast City Airport instead. Belfast was geographically much closer, I also had a friend to stay the night with, thus no airport sleeping required. All seemed well.

My only lingering concern was getting through check-in at the Alitalia desk in Heathrow, as they were not permitting online check-in.

I’d heard that all non-Italian citizens were being asking for documented proof of a solid reason for returning to Italy. Now while I had been living in Italy for almost two years, I did not have any paperwork to prove to the state that my return was of immediate importance.

I need not have worried. Five days out from my departure date I received an email from Aer Lingus saying that my flight time had changed and that they had taken the liberty of rebooking me onto another flight. The email did not state the date or time of the new flight; this information, I read, would be forwarded to me in a future email.

The clarifying email never arrived. I spent a sleepless night and 25 minutes the following morning on hold to Aer Lingus. The agent reassured me that could see no change on the system.

At 7:30pm that night the verdict was in – Aer Lingus had moved all passengers from the early morning Belfast to London flight onto a 1:30pm flight, due I supposed to a significant reduction in the number of business travellers. My London-Rome connection was scheduled to depart an hour before I would now arrive in Heathrow. With a sinking feeling I remembered that I had not paid the extra £45 to have a ‘flexi-ticket’.

I had no choice but to cancel both flights. Alitalia told me I had two options: cancel the flight and lose all my money, or accept a voucher for the value to be used within 12 months. I took the voucher. Still I was not ready to surrender. After hanging up, I got back on the Ryanair website and booked a direct flight from Dublin to Rome for five days later. I knew it was risky. The day before my scheduled departure I began packing, expecting a cancellation at any moment.

Arriving at a deserted Dublin airport the first thing I did was check the departures board. My flight to Ciampino was listed! Mask on I approached security. I counted five other passengers disrobing and loading hand luggage into trays.

There would be no browsing through duty free, but I was surprised to find one of the large cafés open and busy. In fact, the main departures hall was quite a stir with passengers departing for Amsterdam, Malaga, France and various parts of the UK.

READ ALSO: Where can you travel in Europe? EU launches new website to help tourists

Repeated signage urged the wearing of masks, but not everyone was. Specifically, I noticed younger men eschewing any face covering. In contrast, I had waited two months for a pack of sterile masks to arrive from China. I also had a stash of disposable gloves, hand sanitizer and disinfectant travel wipes in my rucksack.

The queue at boarding gate 104 snaked up and around the seating area. A flight attendant marched our ranks barking orders to “spread out”. Most passengers were Italians returning home. They knew the drill. No one complained about the long wait. On board, a seat was left free between passengers. No food or drink was served during the flight and passengers had to use the call bell to signal their desire to use the restroom as the usual queuing system was not permitted.

Other than the initial discomfort of wearing a mask – it does get quite hot under there – it was in fact a very laid-back flight. With reduced passenger numbers even the crew were more relaxed.

Passport control at Ciampino took under five minutes and although I had filled in the autocertificazione form, no one asked for it.

READ ALSO: These are the Italian regions that now require tourists to register in advance

Having checked in advance, I knew that the private bus company which ordinarily runs a service between Ciampino Airport and Rome Termini was not operating. Not wanting to splurge on a taxi, I took a local bus to Ciampino train station and then hopped on the train to Termini. It was all seamless and cost a total of €2.70.

After quite literally months of waiting and uncertainty I was back in 34°C amidst the rumble of traffic over ancient cobblestones, the screech of ambulance sirens, the cascading rhythm of Italian and the scent of warm summer garbage.

It's good to be back.

Joanne Higgins is a freelance writer and English teacher based in Rome, Italy. You will find more of her writings and musings about the human condition and her life in Italy on her blog and website.