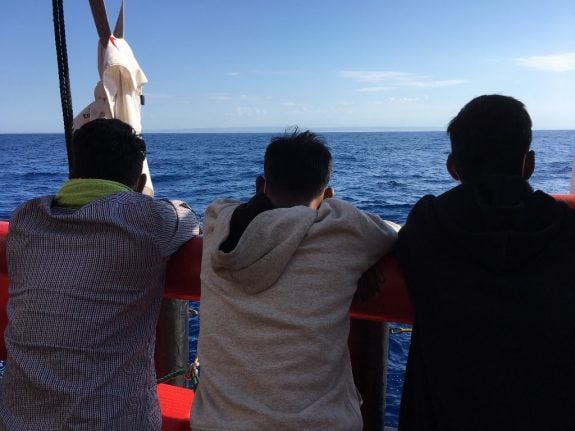 Those on board exploded with joy at the announcement that their ordeal amid the cramped conditions on the Ocean Viking would soon be over, with migrants singing, applauding and taking selfies.

“We have received instructions from the Italian maritime authorities to disembark those on board in Porto Empedocle,” a spokesman for the charity SOS Mediterranee told AFP, which has a correspondent on board.

“We're very happy! We've come a long way, Libya was like hell and now at least we can see the end. I need to tell my family that I'm still alive,” said Rabiul, 27, from Bangladesh.

The Ocean Viking is now heading for the port where the migrants will be transferred to government-chartered ship the Moby Zaza for 14 days of quarantine.

“I can confirm that they're authorised to move to the Moby Zaza, likely tomorrow morning,” Interior Ministry spokesman Dino Martirano told AFP.

They have been on the Ocean Viking for over a week, with fights and suicide attempts on board prompting the charity to declare a state of emergency on Friday.

The Ocean Viking, which has been in limbo in the Mediterranean south of Sicily, has been waiting for permission from Italy or Malta to offload the migrants at a safe port.

Tensions have risen in the past week, as witnessed by an AFP reporter, with the migrants increasingly desperate to reach land. Others have become distraught at not being able to telephone their families to let them know they were safe.

A member of the crew, Ludovic, told AFP he had never witnessed such violence on board a rescue vessel, after a spate of fights between migrants and threats of suicide.

The migrants, who include Pakistanis, North Africans, Eritreans, Nigerians and others, were picked up after fleeing Libya in four separate rescues by the Ocean Viking on June 25th and 30th.

“Now, a second life is in front of us, after everything we went through in Libya. Thank you Italy for offering us a second life, and to SOS Mediteranee for saving the first,” said Emmanuel, 32, from Ghana.

The migrants include 25 children, most of whom are unaccompanied by adults, and two women, one of whom is pregnant.

At times, all the members of the SOS Mediterranee rescue team have been on deck in order to calm tense situations. Some of the threats were directed at the rescuers themselves.

Rumours abounded among the groups of migrants, including that the NGO is in cahoots with Italian authorities, earning money each day the migrants are kept on board.

On Thursday, two migrants threw themselves into the Mediterranean, but were rescued.

More than 100,000 migrants tried to cross the Mediterranean last year with more than 1,200 dying in the attempt, according to the International Organization for Migration.

The arrival of summer and more favourable conditions at sea may lead to an increase of attempts to cross the Mediterranean with the hope of arriving in Europe.