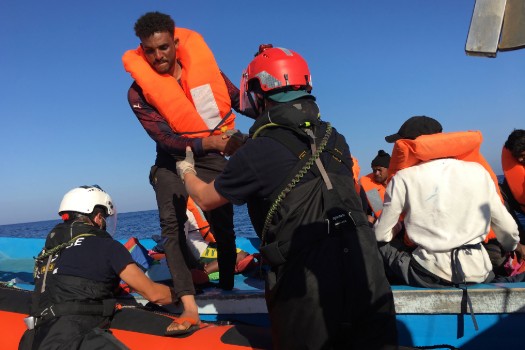 A migrant off the coast of Italian island of Lampedusa. Photo: AFP

Since the start of summer, the island has seen a sharp increase in the number of migrants landing there directly, even as others picked up from the Mediterranean by charity rescue boats have been brought in recent days in Sicily to the north.

Nine boats arrived Thursday from Tunisia, carrying a total of 116 people. A further 434 people arrived Friday, on seven boats from Tunisia and two larger vessels from Libya, according to the International Organization for Migration.

Most of those on the boats from Libya — 95 people on one and 267 on the other — hail from Bangladesh, the IOM said.

The Italian coast guard could not be immediately reached for a breakdown as to which boats made it to shore independently and which were met and brought in by its vessels.

“The arrivals are increasing compared to last year, but still low compared to two years ago, not to mention three or four years ago,” IOM spokesman Flavio Di Giacomo told AFP.

He said that while the past 48 hours had seen more small boats from Tunisia than usual, and it was rare these days to see a vessel arrive with 260 people from Libya, neither was it a warning sign of a sharp increase in migrant arrivals to come.

“There have always been arrivals from Tunisia… sometimes there are many, sometime fewer, and the presence of Bangladeshis on landings from Libya is nothing new,” Di Giacomo said.

There were “clearly a greater number of departures in summer months” but it was “impossible to forecast because the decision to leave, and the possibility of being able to do so relies on too many changing factors”.

In crisis-hit Libya, for example, fighting or the control by militias of some parts of the coast can prevent departures.

The difference from previous summers for those attempting the crossing now was that “there are not enough patrols at sea, and the risk for those who leave is great”.

Furthermore, the Libyan coast guard has upped its operations to stop departing boats and return those aboard to Libya.

“And this is a source of concern because those who are brought back are put in detention and sometimes even sent to centres where often no one can enter and we do not know what happens to people,” he said.