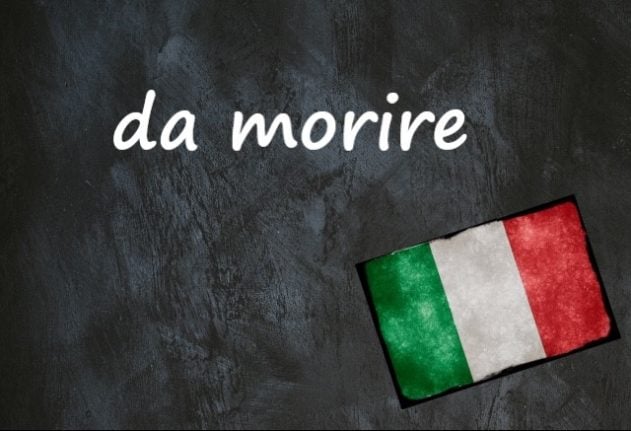 There’s a lot to like – to really, really like – about Italian life: the weather, the food, the culture, and of course the language. And as anyone who has lived here for any length of time will know, there are also quite a few things to dislike pretty strongly as well.

For better or worse, Italy is a place of contrasts and extremes. And you won’t find many people sitting politely on the fence or keeping their opinions to themselves, either.

Living in such a place requires plenty of superlative language: if you’re going to get worked up about things multiple times per day, you’ll find that a simple “mi piace“ or “non mi piace” just doesn’t cut it.

Allow us to introduce you, then, to two little words that will instantly add more drama to everything you say: Da morire

It’s what it sounds like, translating literally as “to death”, and it can be used much as we would in English:

Note however that the sentence above uses the adjective noioso (boring), so would literally translate as “this job is boring to death”, which doesn’t quite work. Since da morire is used as an adverb to modify the adjective, a better translation might be “this job is extremely boring”.

Other uses of da morire don’t translate that easily into English – but the meaning isn’t hard to grasp.

You can simply tack it on to all sorts of phrases to stress how strongly you feel. For example:

– I hate you so much

With verbs like these you can use it as an alternative to tantissimo, to mean “so much”.

And you can even say:

It can be used where in English we’d put an adverb such as really, extremely, terribly, incredibly, or unbelievably (although unlike these words da morire should come after the adjective.)

So now you’ll be able to use this phrase to quickly express a strong feeling or opinion in Italian.

Just try not to use it to death.

A few more opinionated Italian phrases you might find useful:

You can see our complete Word of the Day archive here. Do you have an Italian word you’d like us to feature? If so, please email us with your suggestion.