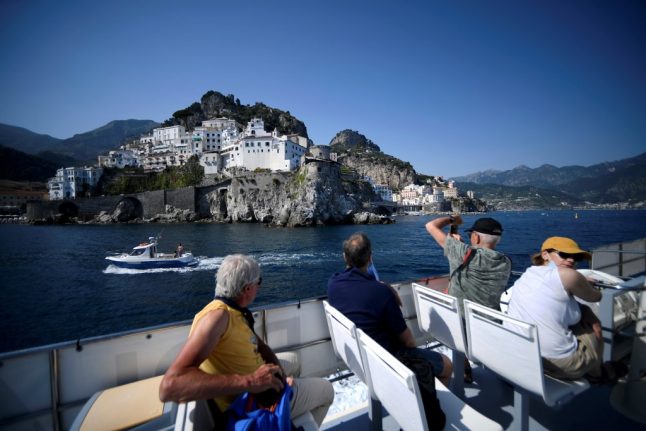 The scenic Amalfi Coast is a favourite among US visitors. Photo: AFP

And though Americans account for only three percent of all tourism to Italy, they tend to be some of the biggest spenders.

IN NUMBERS: How important are American tourists to Italy?

Among the wealthiest US travelers, Italy is reportedly the most popular European country for “affluent empty nesters” – the wealthy US adults free from family ties – and the second-most popular destination among the most affluent American families.

Despite the financial impact however, two thirds of Italians say they don't want American visitors to return this summer due to the current infection rate in the US.

The decision to exclude travelers from certain countries, including the United States, is based on infection rates. Other countries whose tourists are barred from Italy include Brazil and Russia.

Italian tourist board Enit reports an increase in hotel bookings from the US for September and October, and says US visitors will be among the first back – once they're allowed to travel – due to their “affection for Italy.”

But with the number of new Covid-19 cases in the US remaining high, and many Italian voters supporting the current travel restrictions, it's unknown yet when Italy's government may allow tourists from the US back in.

This is bad news for all those who have had to cancel or postpone their Italian vacations – and for businesses, and indeed whole towns and cities, which rely heavily on tourism the outlook is bleak.
Here are the parts of Italy which get the most US tourism, and a look at how each is being affected. With its white and multicoloured huses perched on the rocky coastline, it's easy to see why Italy's Amalfi coast has long been a favourite destination among American visitors.

The beauty of the villages of Sorrento, Positano and Amalfi is world famous, but businesses here are now suffering due to the loss of most of its summer tourism.
“In previous years we had 80 percent foreign tourists, and half of those were from North America,” the head of the local tourist association, Andrea Ferraioli, told AFP. Photo: AFP
Rome
The italian capital is the biggest destination overall for American visitors, and it gets about 6.8 percent of all tourism into Italy from abroad.
Large areas of the city centre are usually given over to tourism, and many of the city's most famous piazzas stood empty under lockdown.
Now, as Italian and European visitors return, some of the city's most upmarket hotels remain closed or operate with a greatly reduced staff as their usual customers remain absent.
“I''ve been out of work since February. The hotel lost almost all of its bookings before the lockdown began, as most customers are American or Chinese, and they cancelled their bookings for this year” said Mario, who had worked as a waiter at a central Rome hotel for the past four years.
“The hotel has reopened now but wih very few staff, and very few guests,” he told The Local. “It's a luxury hotel and I don't think many Italians would pay those prices. So unless a lot of foreign visitors return very soon, I will not have my old job back.” People visit Rome's Spanish Steps in summer 2017, and the scene in April 2020. Photo: AFP
Venice
The second-biggest destination for American tourists is Venice, followed by Milan.
Central areas stood almost completely empty without tourists under lockdown, in a city where locals have been increasingly leaving their homes to make way for vacation rentals.
The lagoon city's reliance on mass tourism is well documented, but the sudden loss of the industry left many people in the city with no income at all.
READ ALSO: 'Without tourists, Venice is a dead city': Not all Venetians are glad the crowds have gone
Some Italian and European tourists are now returning to the city – but this is unlikely to be enough to fill its many high-end luxury hotels, or to save the jobs of all those reliant on the city's enormous tourism sector.
Paola Mar, in charge of tourism at Venice's city hall, told AFP that 65 percent of the city's population works in tourism.
“The impact of the coronavirus on the arrival of foreigners, who account for 85 percent of tourists coming to Venice, is very heavy compared to other destinations with more domestic than foreign tourists,” said Mar. Photo: Marco Sabadin/AFP
Tuscany
The famed central-northern region of Tuscany, and its capital Florence, have been a favourite among US visitors for decades – and are also a popular destination for American students on a semester abroad, as well as US citizens who own second homes in Italy.
The famous Chianti area is particuarly hard hit, say local business owners – though some insist this is an opportunity for towns in the region to move away from a growing reliance on mass tourism.

While Tuscany is also popular among visitors from Europe, and within Italy itself, many businesses – particularly luxury hotels, and shops and restaurants catering to Americans – are likely to struggle with a lack of visitors.
“It's almost not worth reopening this summer, because I make so few sales now. Usually, perhaps 70 or 80 percent of those who actually buy something are American,” Florence souvenir shop owner Paolo Grotti told The Local.
READ ALSO: 'Italy should be wary of tourists, not vice versa' Readers' verdict on travel this summer People on the Ponte Vecchio bridge in Florence in summer 2018. Photo: AFP
Sardinia
Along with Sicily, the sun-drenched island of Sardinia is also a popular destination for US tourists.
One group of wealthy American tourists were so desperate to visit Sardinia during lockdown that they chartered a private jet – and complained when they were turned away by local border police.
READ ALSO: 'Treated like criminals': Italy turns away American tourists on private jet
The island's rural economy relies heavily on tourism and agriculture, and this year business owners are feeling the strain.
Many of the Americans who have moved there permanently have set up bed and breakfasts or other tourism businesses, but they now say it's barely worth opening for the 2020 season.
“I won't be reopening thiis year,” said Cindy Abruzzi, a B&B owner in Sardinia with dual US-Italian ctitizenship.
“Almost all of my clients are from the US, so we have no reservations. I have had some inquiries for September, but I do not want to be responsible for bringing the virus back into this community, so I will be remaining closed.”
Sardinia is also a favourite among Italian holidaymakers – though only 50 percent of Italians say they'll be going on vacation this year.