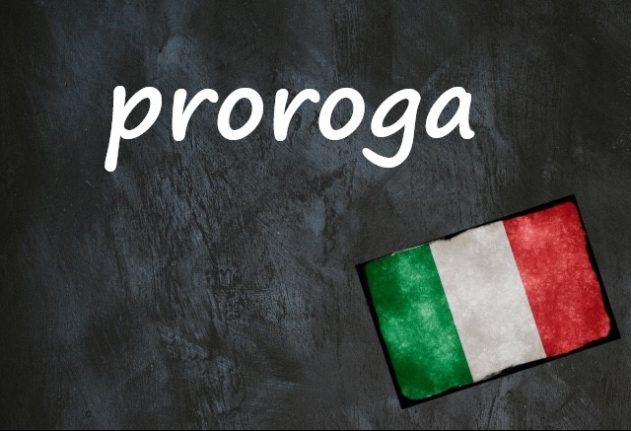 Photo: Annie Spratt/Unsplash/Nicolas Raymond
Whenever the Italian government decides to prolong a policy, this word is used in news headlines to announce it.
– Proroga stato di emergenza
– State of emergency extension
Proroga is a noun (meaning “extension”), and also the third-person form of the verb prorogare, which of course means “to extend or prolong” – usually.
This might be a bit confusing to English speakers, as it sounds like “prorogue”, which instead means to put off or postpone something.
Usually, it describes a government body putting off or postponing business for a while. In the UK we learned this in 2019, when the British government prorogued parliament and everyone had to google what that meant.
Meanwhile, the Italian proroga, or prorogare, is also used regularly by politicians, but instead usually means to continue with, extend, or prolong something.
– il suo visto è stato prorogato a tempo indeterminato
– His visa was extended indefinitely
Both words come from the Latin prorogare meaning “to stretch out”, and Italian has continued to use the same word to mean basically the same thing.
As is often the case when you have two similar-sounding words in English and Italian with the same Latin root, the English version is a bit further from the original meaning.
While “prorogue” has a dusty, 19th-century feel to it, proroga is more commonly understood and used – even if it is very businesslike.
It is also possible to use proroga to mean to delay, defer, or postpone something, much like “prorogue” in English, though this isn't the most common usage.
You might use it like this when talking about something legal, financial, or business-related.
– Speriamo che non ci chiedano una proroga di pagamenti
– Let's hope they don't ask to defer payments
In all other situations you'd probably use the less formal verb rinviare for this.
– rinviare una partita
– to defer a (football) match
See our entire Word of the Day archive here. Do you have an Italian word you'd like us to feature? If so, please email us with your suggestion