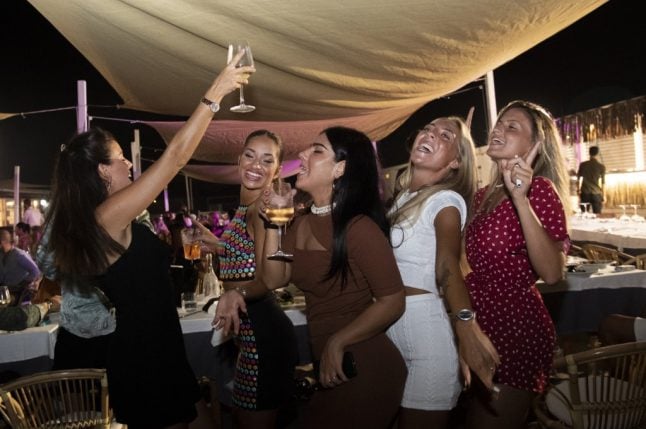 People dance at a beach club in Ostia on August 14th. Photo: AFP

At the “Kiki” nightclub in Ostia, a popular seaside resort on the outskirts of Rome, the coronavirus threat seems both distant and yet very present.

During 50's night at this open-air disco on Ostia's beachfront, the rules are well known: a mask is mandatory, and dancing must be done at least one metre from a partner.

“Who cares about all that,” laughed one partygoer, Claudio, his belly jutting forward and shirt wide open. With his mask in his pocket, he boogies alone, not to respect social distancing but because his friends are chatting elsewhere.

READ ALSO: What you should know if you're visiting Italy this summer

Around him, the approximately 200 to 300 party-goers dance to the blaring electro music, many without masks as they flirt, laugh and drink gin and tonics in the heat.

It takes the weary insistence of the staff, the calls of the DJ and a rumour of a possible police raid to get the crowd to comply begrudgingly and cover their faces.

While the threat of a second wave of coronavirus looms nearer in several European countries, such as Spain, Italy is trying to stem new infections in the middle of “Ferragosto”, the sacrosanct holiday weekend of August 15th.

Bonfires on the beach and a traditional midnight jump into the sea have been banned this year as the government and regional authorities cotinue to argue over the thorny issue of discos.

The topic is politically sensitive, as authorities don't want to appear to be punishing Italians during well-deserved summer holidays after a gruelling lockdown that was largely respected by most.

Inside-only nightclubs are still prohibited from operating, but regions have the discretion to open or shut open-air discos.

Calabria, for one, has ordered the closure of all dance venues, while Sardinia has kept them open. Some, like Veneto to the north, have ordered reduced occupancy.

The sector employs nearly 50,000 people in 3,000 nightclubs around the country, according to the nightclub operators' union (SILB). A craft beer bar in Rome where masks are being worn in May 2020. Photo: AFP

Despite any hit to the economy in keeping discos closed, health authorities acknowledge they represent a serious risk. A meeting on the subject between national and regional government representatives is scheduled for Sunday, according to Italian news wire AGI.

Images of crowds of young holiday-goers dancing and drinking at night have been plastered on the front pages of Italian newspapers.

“The contagion is on the rise but we're dancing,” proclaimed the Corriere Della Sera, which slammed Sardinia's clubs as being “joyful contagion machines”.

At “Manila Beach” in Fregene, on the coast outside Rome, party organiser Gianluca Skiki said his venue, which normally welcomes up to 2,000 customers on its beach, has to make do with 250.

Despite some semblances of a nightclub – a DJ, sequined miniskirts and high heels worn by some – the experience appears odd. Couples sit at tables with distance between them to eat, and are instructed to dance only in front of their tables.

“If the police come, everyone has to be at their table,” Skiki explained.

“There's no real nightclub here any more, it's about the only thing we're allowed to organise.”

He acknowledged the experience falls short of the carefree, wild parties of the past.

“I hope it will be the last of its kind…”