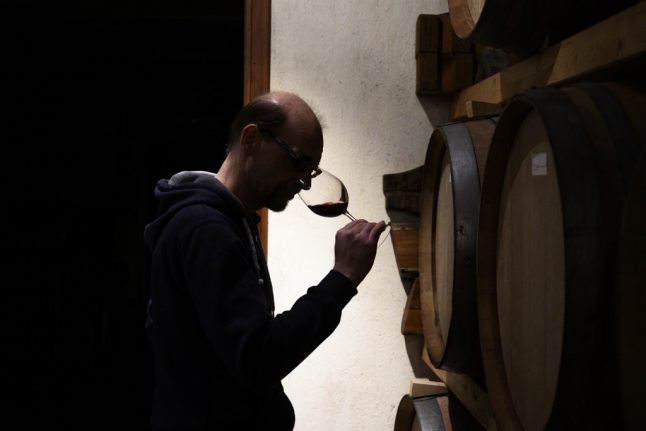 A Barolo winemaker in his cellar in Piedmont. Photo: AFP
Exports of italian wine have dropped four percent so far this year after the virus forced the closure of restaurants in Italy and elsewhere, hitting the country's producers and exporters hard.
The pandemic has reduced demand to the lowest level seen in 30 years, Italy's agricultural trade union Coldiretti said on Friday.
In June, the Italian government adopted a decree allowing some 70 million bottles of surplus wine stocks to be turned into hand sanitiser gel, to help make space in cellars while easing sanitiser shortages during the emergency.
But many winemakers had been understandably reluctant to send off their produce to be turned into sanitiser – particularly as it tends to be the best bottles left languishing in cellars.
READ ALSO: Why Italy's best winemakers are being hit hardest by the coronavirus crisis
Now however with the next grape harvest coming up and exports still sluggish, producers have to make room.
Consumption of Italian wine in China, where the virus first emerged in December, nosedived 44 percent in the period between January and May, data
compiled by the national statistics institute Istat showed.
Exports to France dropped 14 percent and in Britain – where uncertainty over Brexit also played a role – they fell by 12 percent.
By contrast, exports were stable to Germany and the United States – where punitive customs duties could hit future exports – over the same
period, slipping by just one percent, Coldiretti said.
READ ALSO: Drinking alcohol won't boost coronavirus immunity, Italians warned
Wine is Italy's main agricultural earner in the US, with exports worth 1.5 billion euros ($1.8 billion) annually.
In 2019, Italy exported a total 6.4 billion euros worth of wine overall, primarily to the US, UK and Germany.
“With almost four out of 10 producers in difficulty after the (coronavirus) crisis, we must swiftly intervene to support exports, reduce costs and
cumbersome administration,” said Coldiretti chairman Ettore Prandini.
Jobs are also at risk with many of Italy's wineries – often small, family-run businesses – now struggling to make ends meet.
As a result, over the past two months producers have increasingly started to offer wines for sale directly to the public.