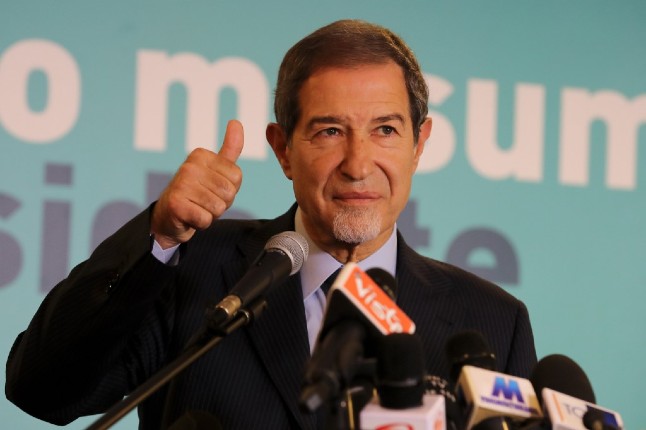 Center-right leader Sebastiano "Nello" Musumeci gives a press release during the strongly contested regional election in June. Photo: Carmelo Lenzo/AFP
Interior ministry officials in Rome dismissed the order as invalid but anti-migrant former interior minister Matteo Salvini praised the move ahead of a flurry of local Italian elections next month.
Migration has for years been a hot-button political issue in Italy, a main EU landing point for migrants crossing the Mediterranean who often arrive first in Sicily and sister island Lampedusa.
“Between now and midnight, all migrants in Sicily's 'hot spots' and reception centres will have to be transferred to facilities outside the island,” according to a decree published Sunday.
The document also bans any migrant from “entering, transiting and stopping over on the Sicilian region's territory (which includes Lampedusa) with vessels big and small, including those belonging to charities,” it said.
Musumeci justified his decision saying: “It is not possible to guarantee a visit to the island while respecting measures to prevent infections spreading.”
Mayors on the island have voiced fears the presence of migrants will discourage tourism.
“Sicily cannot be invaded while Europe is looking away and the government resorts to no deportations,” Musumeci said on social media.
Sicily has no real means to transfer migrants outside the island and interior ministry officials say migration is legally a central government prerogative.
Salvini, as interior minister until a year ago, clashed with EU officials with his outspoken refusal to allow ships to land migrants, including those run by charities, on Italian shores. But he ended up forcing several EU countries to take a share of the migrants.
Many small vessels carrying migrants, especially Tunisians, are arriving on tiny Lampedusa, south of Sicily.
Dozens of migrants housed in Sicilian centres have tested positive for the coronavirus in the last few weeks.
From August 1 last year to July 31 this year, over 21,600 migrants arrived at Italy's shores, almost 150 percent more than the near 8,700 landings the year before, according to official data.
Despite the sharp rise, the number of migrant arrivals is still far below numbers recorded in recent years, especially before Rome signed a deal with Libya for its coast guard to prevent migrant departures.