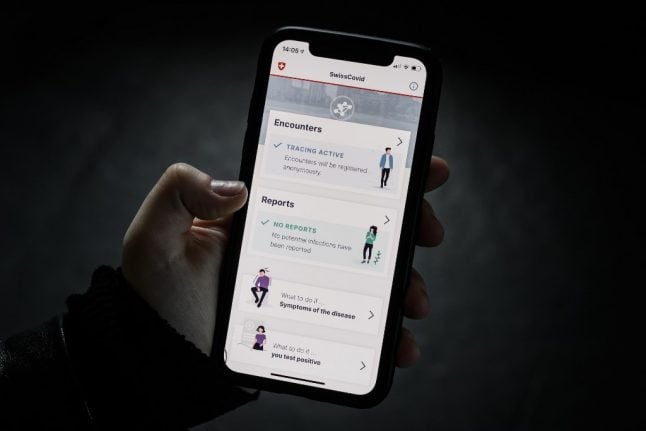 Designed to help fight the spread of the novel coronavirus by automatically tracing the contacts of infected people, Covid-19  tracking applications have encountered a series of challenges since their launch, from privacy concerns to technical glitches.

Here is a round-up of the main European contact tracing initiatives and their varying degrees of success.

Launched in June, the German track and trace app is seen as “an important additional tool for keeping infection rates down,” but “no cure-all,” according to government spokesman Steffen Seibert.

In a country whose population jealously guards security and control over their personal data, the app has generally been well-received, even by staunch privacy advocates like the Chaos Computer Club.

As of September 1st, the app had been downloaded 17.8 million times — compared with an overall population of around 83 million — and at the start of July, it had alerted several hundreds of cases of infections.

The French government launched its StopCovid app at the beginning of June, but by mid-August it had only been downloaded some 2.3 million times, compared with an overall population of 67 million. So far, only 72 possible risk contacts have been flagged up by the app, while 1,169 users have declared themselves positive.

StopCovid has been criticised by IT specialists with regard to data privacy.

Based on a so-called “centralised” protocol, the French app is incompatible with the majority of its European peers which are “decentralised”.

Under the centralised model, the anonymised data gathered are uploaded to a remote server where matches are made with other contacts, should a person start to develop Covid-19 symptoms.

The decentralised model gives users more control over their information by keeping it on the phone. It is there that matches are made with people who may have contracted the virus. This is the model promoted by Google, Apple and an international consortium. Favourable marks for Switzerland and Italy

SwissCovid, developed by the EPFL university of Lausanne and based on the decentralised protocol, began testing on May 25.

Nearly 1.6 million people now actively use the app, which has been downloaded 2.3 million times out of a population of 8.5 million.

At the beginning of September, the app was signalling an average 56 infections every day and seems to be generally well accepted by the population.

In Italy, the Immuni app was downloaded 5.4 million times, equivalent to 14 percent of the overall number of potential users (excluding anyone under the age of 14 and people without mobile phones). According to official data, 155 users have declared themselves positive between June 1 and August 31.

Spain: yet to see

In Spain, everyone is encouraged to download the Radar Covid app which is currently already integrated with heath authorities in 13 out of 17 of Spain's autonomous regions and is supposed to alert those who have been in close contact with someone who then tested positive, without revealing identities or locations.

The government said it would be fully operational in all areas of Spain by September 15th and that from the middle of October, the Radar Covid app will be tested for use with other apps across Europe.

By the end of the first week of September only 3.5 million people in Spain had downloaded it, with authorities insisting that a minimum of 9 million people (20 percent of population) could reduce spread of the pandemic by a third.

Denmark’s Covid-19 tracking app, Smittestop, was released in June and was downloaded by 245,000 people on its first day. That was reported to have increased to 1 million by mid-August, with 400 people having logged in to the app to register that they had been infected.

The app notifies other users of the app that have been in close proximity if a user registers a positive coronavirus test.

That enables it to let people know if they have been potentially exposed without any personal communication.

The Smittestop app was developed using Apple and Google tech designed to protect personal data, according to Danish reports at the time of its launch.

It was criticised last month for the unclear wording of its notifications, which state the number of “potential exposures”.

An iPhone notification from a device on which the Smittestop app is downloaded.

But the Apple and Android operating systems do not mimic the Danish health authorities’ criteria for close contact, which, for users of the app, are a proximity of 1 metre from an infected person for 15 minutes or more.

“If you have not received a message from the Smittestop app about infection risk, but have been notified by the (smartphone) operating system about potential exposures, this means that the contact with the other app user does not meet health service criteria for an infection risk,” the Ministry of Health explained.

Damp squibs in Norway and Britain

In June, the Norwegian health authorities suspended the locally developed app after the Nordic country's national data protection agency found it too intrusive.

Authorities are currently working on a solution which they hope to launch before Christmas and do not rule out resorting to Google and Apple technology.

In Britain, the government revealed its first attempt at a contact-tracing app in May.

But in a major U-turn in June, it abandoned the app, based on the centralised model and seen as flawed.

The government, which blamed the problems on restrictions imposed by Apple, has since switched to the decentralised approach. But, as yet, no track and trace app is widely available in much of the UK.

Northern Ireland, however, rolled out its own app at the end of July and it

Downloads of Iceland's app peaked shortly after its launch — at an estimated 40 percent of the population, the user rate is high — but rose again with the start of the tourist season.

Visitors to the volcanic island are encouraged to download the app, not only for its good functionality, but also because it contains links to important Covid-19-related documents and even has an online chat function.

Unlike other tracing apps in use in Europe, the Icelandic one can track an individual's movements in the case of infection or suspected infection. And, with the individual's permission, it uses GPS to geo-locate the phone.

Portugal only launched its tracing app this month and it has come under fire from consumer rights groups for perceived loopholes in personal data usage and the dominant role played by tech giants in drawing up health protocols.

In addition, media reports suggest around 800,000 mobile phones — out of an overall population of 10 million — cannot install the app because of incompatible software, ultimately rendering it useless.