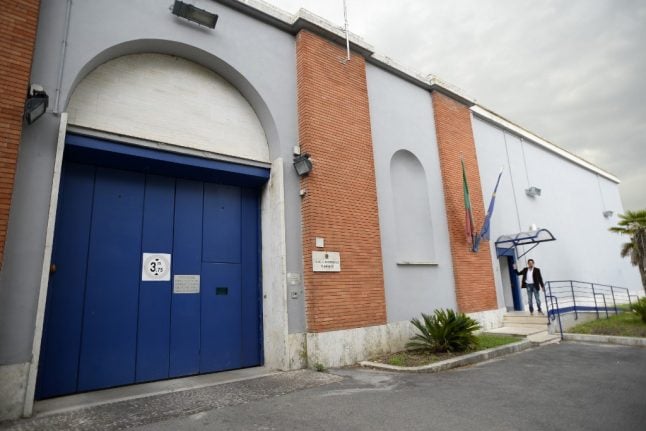 The incident took place at the Rebibbia prison in Rome. File photo: AFP
Giuseppe Fanara, 60, who is serving a life sentence at Rome's Rebibbia prison, attacked seven guards in June when they came to inspect his cell, the daily Il Messaggero reported.
Fanara, from Sicily's notorious Cosa Nostra clan, was nine years into his sentence under Italy's tough “41-bis” prison regime usually applied to mafia members.
The rules isolate mobsters entirely to prevent them from running their clans from behind bars.
“During the altercation he (Fanara) bit off the agent's little finger on his right hand,” the paper said.
“The finger disappeared, leading a Rome prosecutor to conclude it had been eaten,” it added.
The prisoner then charged the six other guards, using a broomstick as a weapon, allegedly shouting “I'll slit your throats like pigs!”
Fanara has since been transferred to Sardinia's high-security Sassari prison, the paper said, adding that he faced new charges including aggravated assault and resisting arrest.
Meanwhile on Tuesday a serial murderer escaped from the Sassari facility for “at least the third time” while serving a life sentence, police said.
Earlier this year Italy decided to release elderly and infirm mobsters due to the coronavirus outbreak – including some belonging to the influential Cosa Nostra.
That decision sparked an outcry, forcing the justice ministry to backpedal and review the release decision.
Fanara was handed a life term in 2009 following an anti-mafia sweep in 2006 in Sicily's Agrigente region.
His trial and conviction, which led to three life sentences and an 18-year term, was sparked by the murder of two brothers who had bucked the mafia's demands, and by the killing of three men in gang wars in the late 1990s.