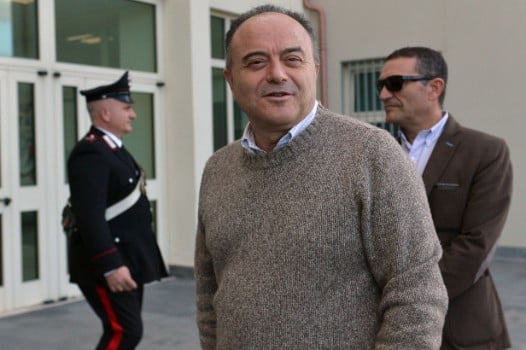 The first salvos in a court battle were fired Friday as a preliminary hearing against 'Ndrangheta members opened in the Italian capital, in a case not seen since the days of the “Maxiprocesso” trial against the Sicilian Cosa Nostra in the mid-1980s.

Gratteri, 62, who has spent three decades under close police protection, is hoping to send more than 450 suspected clan members to jail for belonging to a criminal gang that allegedly built its fortunes and sinister reputation on extortion, money laundering, kidnapping, drug trafficking and so-called vendettas.

MUST READ: Meet the ’Ndrangheta: It's time to bust some myths about the Calabrian mafia

“It's a war,” Gratteri told AFP shortly after the preliminary hearing concluded in Rome in the case against Italy's only mafia group with tentacles on every continent.

“We are talking about violence, about death,” added the prosecutor, based in the southern Italian town and 'Ndrangheta stronghold of Catanzaro, where he lives with constant death threats.

Describing the case as “historic”, Gratteri believed it to be the most important in Italy's battle against mobsters since the “Maxi” trial, which eventually saw hundreds of Cosa Nostra members convicted.

Those hearings however were marred by violence including a mafia hit on its best-known judge and prosecuting magistrate Giovanni Falcone, murdered with his wife and three police officers in 1992.

When formalities conclude in Rome and a fortified courthouse in built in Calabria, the hearings are due to move to Italy's southern region where no less than 600 lawyers and 200 civil parties will be present.

Hundreds of 'Ndrangheta crime bosses, underbosses and “soldiers” were arrested in December in one of the biggest police raids against the crime syndicate in years.

The swoop extended as far as Germany, Bulgaria and Switzerland and netted a former MP and the head of the Calabrian mayors' association among others.

For many years perceived to be the poorer cousin to better-known mob groups such as the Cosa Nostra and Napoli's Camorra, the 'Ndrangheta has since surpassed them to become Italy's most powerful crime organisation.

With its name stemming from unknown origins, but said to have been derived from Greek meaning to exalt virility and courage, the 'Ndrangheta today is a modern and feared crime gang. Mafia boss Salvatore Coluccio during his arrest in 2009. Photo: AFP

It controls part of the international cocaine trafficking network with footholds in New York, Colombia and Brazil, has infiltrated the construction industry, runs European-based funds and even funeral contracts, now boosted by the Covid-19 pandemic.

“The 'Ndrangheta is much feared for its ferocity and its cruelty. Yet at the same time it's very modern — and ready to flood Europe's markets with tonnes of cocaine,” the grizzled prosecutor said.

According to Italian justice figures, there are some 20,000 'Ndrangheta members globally, running a business that generates an annual turnover of more than 50 billion euros ($59 billion).

The upcoming trial against the 'Ndrangheta appears to have been a severe blow, yet it could not be compared to the Palermo-based Maxi trial which opened in 1986, criminologist Anna Sergi said.

“During the Cosa Nostra Maxi trial they brought down the heads of all the major families, in this operation it is not the case,” according to Sergi, an associate professor at the University of Essex.

“Some major people… will go on trial but I would not go and say that this will have the same significance, should they all be jailed,” Sergi told AFP.

Made famous by Hollywood, the mafia first showed up in Sicily about 150 years ago and has since firmly been established through Italy.

Through the years it has diversified, modernised and become highly sophisticated.

But at the same time law enforcement hasd also made leaps thanks to international cooperation, sharing digital files and new technology such as thermal cameras, drones and cyber surveillance — and the commitment of prosecutors like Gratteri.

However law enforcement has never completely managed to cut down the hydra in a country where complicity can be found “at all levels of state administration,” Sergi said.

“The mafias are not external bodies to our otherwise well-functioning society, they are the mirror of our functioning,” added Gratteri, quoting the late judge Falcone.

“Italy is unable to admit it, it makes an enemy of it, forgetting that it (the mafia) is part of who we are,” he said.

“In each of us there is a little 'Ndranghetist',” said Gratteri.

SEE ALSO: Italy's 'Ndrangheta on all continents and still growing