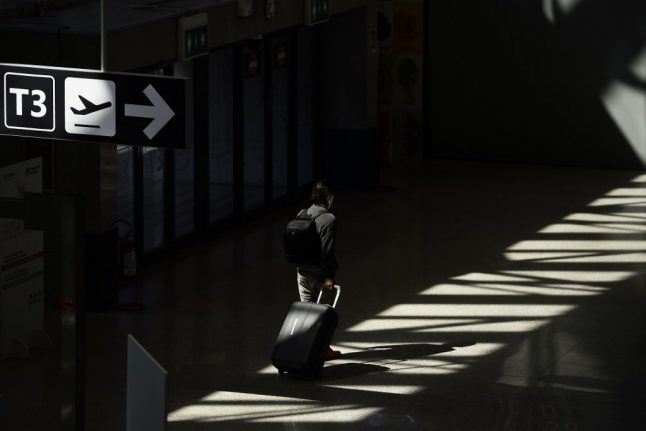 Quarantine in Italy: How do you get back from the airport? And can you take out the rubbish? Photo: Filippo Monteforte/AFP

The anxiety I felt as my dad drove me to JFK airport for my flight back to Rome had little to do with coronavirus.

Instead I worried about nearly everything else. How long until my next visit? Should I wait until there’s a vaccine? Will my grandmother remember me next time?

It was late August, and I was returning to Italy from visiting my family in New York. I was torn over whether to travel, but my grandmother’s memory had been deteriorating since 2018 and there were no guarantees regarding her health.

Meanwhile, epidemiological conditions had improved greatly in both New York and Italy, and looking ahead there was no telling what the fall and winter might bring.

Having made the opposite journey a month earlier, the trip no longer seemed like some looming unknown.

READ ALSO: How have Italy's travel rules changed under the latest emergency decree?

Like on my way out of Italy, as a dual US-Italian passport holder I was given little trouble at check-in, and my flight back to Rome was even emptier than the one I’d taken a month prior, no more than a quarter full.

Compared to my outbound journey, the passengers and attendants were better behaved mask-wise (in addition to a handful of face shields, one family of three was wearing matching ski goggles), and feeling a little less anxious I even managed to sleep a few hours this time around – though I once again sat through the entire nine-hour flight without once using the bathroom.

The only incident was an argument across the aisle between a fellow passenger and one of the flight attendants. He seemed respectful enough, but he simply wouldn’t accept the flight attendant’s news regarding our quarantine requirement. She kept shrugging her shoulders and explaining that she didn’t make the rules.

I remember his reply quite clearly: “It’s not that I don’t want to do it, it’s that I don’t think I can do it.” I wondered how many other passengers felt the same way he did.

I expected plenty of scrutiny at the airport in Fiumicino, but instead I made it through arrivals in record time. The border control agent copied down some information from my Italian passport, but didn’t ask me a single question about my trip before sending me off to baggage claim.

We were given no instructions or information other than the declaration form we signed (we didn’t even get to keep a copy for ourselves).

The whole thing felt a little too laid-back given the dire circumstances in the US and rising case counts across Europe. There was a maskless carabiniere directing passengers at border control – he didn’t even have one hanging around his chin!

In line with Italy’s quarantine requirements for travelers arriving from the US, I booked a private car to the airport rather than my usual €6 bus. The only stop I made between the airport and my front door was to check the mailbox.

I’d been prudent enough to stock the apartment with toiletries and non-perishables before leaving Rome, so I already had some essentials on hand as I began quarantine day zero.

Once I shut the apartment door behind me, that was it. Fourteen days and counting. You'll have to give the address where you plan to quarantine when you enter Italy. Photo: Miguel Medina/AFP

I’d expected some scrutiny from the local health authorities upon entering quarantine. After all, I had just re-entered Italy from the country with the highest number of Covid-19 cases and deaths in the world.

But instead there was near radio silence. My local health authority, or ASL, was nearly impossible to reach by phone, so I finally called the regional coronavirus hotline instead (800 118 800 in Lazio).

They basically confirmed what I already knew, with a few caveats. I had to stay in quarantine one day longer than I’d anticipated (despite landing at 7am local time, my arrival day did not count as one of my 14 days of isolamento), and under no circumstances was I allowed to take the garbage out.

I was told that AMA, the municipal garbage service, would contact me to arrange for a free door-to-door garbage pickup. This, of course, never happened, and I later realized that the system was stretched to capacity: by the time I finished quarantine, more than 4,000 people in Lazio were in home-isolation after testing positive for Covid-19 (not even including quarantined travelers like myself).

That’s a lot of phone calls to make, and a lot of doors to knock on.

READ ALSO: Covid-19: What happens if I test positive on arrival in Italy?

Missing garbage service aside, quarantine in Rome was a much more challenging experience than the 14 days I’d spent in mandatory isolation at my parents’ house in New York. In stark contrast to their sprawling suburban getaway, my apartment in Rome is a compact 40 m2, with just the teeniest of balconies overlooking our condominio’s concrete courtyard.

Jet lag only made matters worse. It’s already difficult to keep track of time in quarantine, even more so when your body is running six hours behind schedule.

Remote working was a godsend. A calendar full of Zoom meetings helped me feel a little less disconnected from the outside world. The rest of my time was filled with calls to my girlfriend, friends and family back home, a few Netflix series, far too much online shopping, cooking, cleaning, and a few too many glasses of wine. (An informal Instagram poll I conducted later confirmed what I already knew at heart: quarantine drinking does not count as the bad kind of drinking alone.)

Naturally, the first question my grandmother asked me via video call, just a day or two after landing in Italy, was the same one she’s asked me every week for the last two years: “So, will I get to see you one of these days or what?”

The ASL first contacted me directly on day ten of my quarantine, mostly to confirm my information and check whether I’d developed any symptoms.

They also asked if I would be interested in getting a tampone (not required for those undergoing the full quarantine), but quickly rescinded the offer upon learning that I had no car with which to drive myself to the testing center. They called again on my last day, this time to confirm that I could finally leave the apartment the following morning.

I’d originally planned a sort of “passeggiata della liberazione” as soon as the clock struck midnight on my final day of quarantine, but a text from my neighbor made me hold off. She had knocked for a small favor the day before, and I’d said that I probably shouldn’t open the door for her while in quarantine.

Now she was nervously texting me to ask whether I had tested positive for Covid, whether I might be contagious. The last thing I wanted was for her to hear me “sneaking out” of the apartment in the middle of the night, and all the questions that might bring.

So instead I waited until the next morning to take the garbage out and go for a walk around the neighborhood. I’d be shocked the next day at how sore my legs were, having only walked as far as the distance between my couch and bed for two weeks.

Later that afternoon I took the metro to Roma Termini to greet my girlfriend, who was returning from Puglia now that I’d finally completed quarantine.

As I stood in the crowd waiting for her train to arrive, I wondered how many people walking past had been cooped up like I had, or if anyone was there in defiance of their quarantine order – someone like that man from my flight. I wondered how many had lost a loved one, or had been sick themselves since the pandemic started, or would become sick in the months to come.

Originally from the suburbs of New York City, AJ Fitzgerald is an Italian-American writer and educator currently based in Rome. Follow him on Instagram or on Twitter.

Have you been quarantined in Italy? If you'd like to share your experience with The Local, please email the editor here.