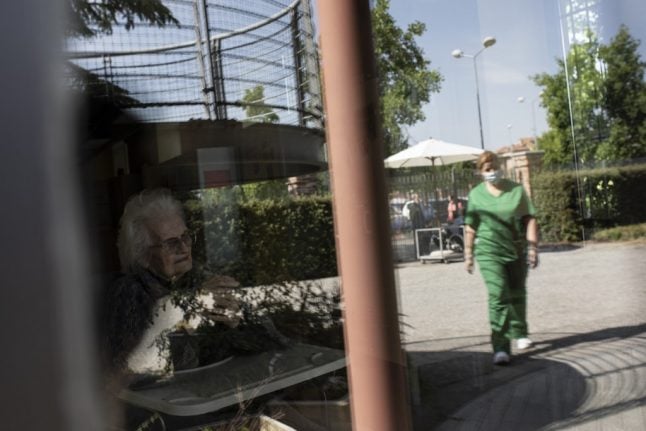 An elderly resident of a retirement home in Piedmont, northern Italy, is pictured trough a window as she waits for relatives to visit. Photo: Marco Bertorelli/AFP
Nearly half of care home workers surveyed in northern Italy may be suffering from post-traumatic stress or anxiety following the first wave of the pandemic, the new research showed on Wednesday.
As Covid-19 began its spread throughout Europe, northern regions of Italy – home to a high proportion of elderly people – were at the frontline as intensive care units were inundated with patients.
While much attention was focused on the physical health of first responders and doctors, far less study has been given over to the mental well-being of the nurses, cleaners and caterers at care homes. A nurse pushes the wheelchair of a patient at a retirement home in Piedmont, northern Italy. Photo: Marco Bertorelli/AFP
Researchers in Italy and Britain conducted an anonymous survey of more than 1,000 care home workers to check their levels of stress and anxiety after months of caring for sick residents.
They found that 43 percent of respondents passed the symptom threshold for anxiety and PTSD.
“Due to the severity of the situation, we were expecting a reasonably high prevalence, but not as high as we found,” Elena Rusconi, from the University of Trento's Department of Psychology and Cognitive Science, told AFP.
'Overlooked'
Authors of the research, published in the journal Royal Society Open Science, said care home workers had faced exceptionally testing conditions during the first wave.
Unlike emergency health staff, care home workers often form tight bonds with residents, making it all the more emotionally taxing when one gets ill or dies.
In addition, they had to manage communication with families who were unable to see their loved ones because of the virus.
The workers frequently lacked sufficient personal protective equipment and materiel for hygiene and safety protocols.
READ ALSO: 'Like biological bombs': Italy's doctors warn against virus patients being sent to care homes
Rusconi said the research showed how governments and society at large often overlook care home workers, especially in times of crisis.
She said that care work required skill and dedication, yet often went underappreciated.
“They deal with a part of society that we don't want to think too much about, perhaps from a sense of guilt,” Rusconi said.
Noting that “many (not all) care home staff in Italy come from abroad,” she added: “Although they may have resided in Italy for a long period and have
citizenship, they originally came to take on a job that is, perhaps, considered undesirable and is certainly less esteemed compared to that of hospital doctors and nurses.”