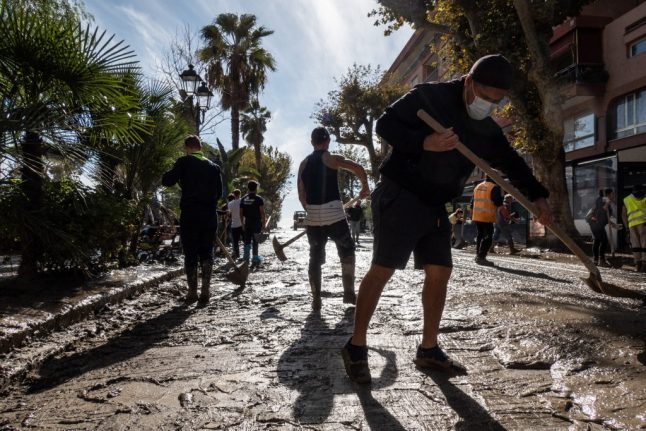 People clean the mud in Ventimiglia on October 3, 2020 after the Roya river flooded overnight, submerging the whole city with water and mud. Federico SCOPPA / AFP

Hundreds of rescuers continue the search for stranded survivors after storms and torrential rain caused severe flooding across northern Italy where roads were washed away and villages cut off.

Two people were reported to have died in the flooding and landslides in Piedmont.
On Sunday and Monday five bodies were found in the sea off Liguria. They are believed to have been swept away in the Val di Roya valley between Italy and France.
A volunteer firefighter died in Italy's Aosta Valley during a rescue operation and a man was killed after his car was washed away in the river Sesia, about 100 kilometres (60 miles) further east.
Storm Alex barrelled into France's west coast on Thursday bringing powerful winds and rain across the country before moving into Italy, where torrential rain of up to 50 centimetres (20 inches) and high winds crashed into the border area.

Italy had reported a large group of people missing after landslides hit the border area near the Col de Tende mountain pass in France.

But on late Saturday the Italian civil protection agency spokeswoman Mara Anastasi said 21 people had been found and evacuated by helicopter, including two Germans and their grandchildren.

Dozens of firefighters were trying to reach one Italian village by train after the road was shut. People clean the mud in Ventimiglia on October 3, 2020 after the Roya river flooded overnight. Federico Scoppa/AFP

The presidents of Italy's Piedmont and Liguria regions signed a joint letter calling on the government to declare a state of emergency with several villages cut off.

“The situation is very serious. It is like it was in 1994,” when 70 died after the Po and Tarano rivers flooded, Piedmont's president, Alberto Cirio, told La Stampa newspaper.

“The difference being 630 mm of water fell in 24 hours — unprecedented in such a small timeframe since 1954.”

Cirio added Italy was already struggling to cope with the effects of the coronavirus which has left some 36,000 dead and shattered the economy over the past six months.

“We are already in an extraordinary situation. Because of the pandemic the region will this year receive 200 million euros less in tax receipts. If the state does not intervene (with rescue funding) we shall not recover.”

The mayor of the northern Italian city of Ventimiglia, Gaetano Scullino, meanwhile said “a disaster of this kind has not happened since 1958”. A bulldozer clears the mud by a collapsed Squarciafichi walkway by the Roya river in Ventimiglia on October 3, 2020 after it flooded overnight, submerging the whole city with water and mud. Federico Scoppa/AFP

Authorities in Venice had expected the city — which also suffered violent storms in August — to be submerged by an 'acqua alta', an occasional tidal peak coming in from the Adriatic to reach the Venetian Lagoon and flood as far as the iconic Saint Mark's Square.

But flooding was kept at bay by the long-awaited and controversial Mose flood barrier system, which was activated for the first time on Saturday.

The head of the Association of Saint Mark's Traders hailed an “historic day. “Normally we would have been up to our knees in water,” Claudio Vernier said.

Mose has so far cost upwards of 7 billion euros, and has long been mired in cost issues, delays, corruption scandals, and criticism.

After construction work on the barrier began in 2003, the original completion date was set for 2014, then 2016. After tests in 2019 revealed worrying vibrations, and parts of the barrier were found to have rusted, there were fears it may not be completed by 2021 as hoped.