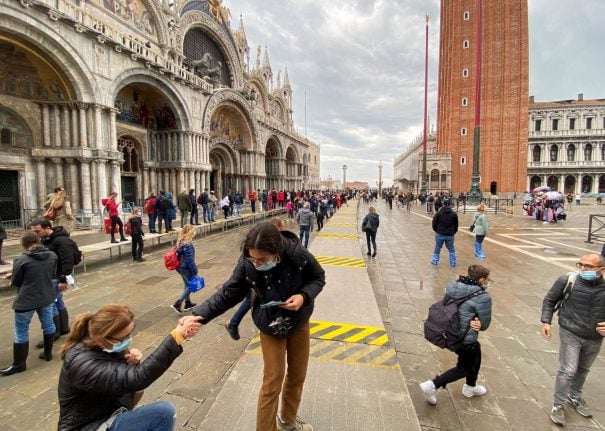 People climb over raised walkways put in place ahead of forecast high tides in Venice on Saturday. Photo courtesy of Avoid-crowds.com
Named Mose (The Italian name for Moses, after the biblical character who parted the Red Sea, but also a clever acryonym of Modulo Sperimentale Elettromeccanico or “Experimental Electromechanical Module,”), the system comprises 78 gates that can be raised to hold back the tide in order to protect Venice's fragile lagoon – and the city itself.
One of the biggest civil engineering projects in the world, work began on Mose in 2003 and it has cost upwards of seven billion euros.
When high tides were forecast for Venice on Saturday, residents prepared to get soaked, as usual, despite the city announcing it would activate the long-awaited flood barrier for the first time.
A previous trial of the system in July had been successful, officials said. But this did little to instill confidence among the lagoon city’s residents after decades of seemingly endless difficulties. Few expected it to withstand its first real test.
Venice authorities put the usual flood preparations in place, including raised walkways in St Mark's Square. Visitors, residents and journalists stood in the square waiting to see what would happen, with many wearing heavy-duty waterproofs just in case.
But to everyone’s surprise, the barriers managed to hold back the tide as it rose.

An acqua alta of 135cm was forecast for today. But after years of work, a load of corruption, millions of euros and much scepticism, the Mose barrier worked and Venice stayed dry. Venetians are overjoyed, and so am I. https://t.co/jkAKzyOmB1

By 10am all 78 floodgates barricading the three inlets to the lagoon had been raised. Officials said water levels in the lagoon remained steady even as the tide neared 120cm, or four feet.
Importantly, the lowest-lying part of the floating city, Piazza San Marco or St Mark's Square, did not flood.
“Piazza San Marco today for the first time remained dry during high tide. It is a historic moment for Venice,” Claudio Vernier, president of the Piazza San Marco Association., told reporters on Saturday.
“It makes us optimistic for our square, for our city and for all citizens,” he added. “We can look to the future with more confidence.”

“Honestly, I never thought this day would come,” said Cat Bauer, writer and blogger at Venetian Cat – The Venice Blog, who has been a resident of Venice since 1998.
“I was stunned by how elated I felt when Mose actually worked,”  she told The Local. “I had never liked it from the start, so I was surprised that now I felt gratitude and joy.”
As well as delays, cost overruns and corruption “that seemed to stretch on for eternity” she said the flood barrier was “controversial before construction even began, with much concern about the impact it would have upon the lagoon.”
Following the devastation caused by last year's floods, the past year has been an exceptionally tough one for Venice and its residents, she explained.
“Combined with overtourism, Venice was stressed to the max. Then came the pandemic and shut the whole thing down.”
“That Mose actually functioned in the middle of a global health crisis is astonishing,” Bauer said. “There is much more work to be done, but it is a ray of hope for Venetians who deeply love their city.”

High tides are a regular occurance in Venice. The city's residents are used to the “acqua alta” regularly flooding streets, shops and hotels as well as the famous St. Mark's Square.
However, the tides have been getting gradually worse, and the city suffered severe flooding in November 2019 as water levels reached 187cm.
This was the highest tide seen since 1966, and while residents are well-equipped to deal with some flooding it was far more than the city could withstand.
IN PHOTOS: Venice left submerged as exceptional tide sweeps through canal city
However, as many in the city pointed out, the success of Mose on Saturday doesn’t mean visitors to Venice can leave their rubber boots at home in future.
Mose will only be activated when water levels are set to reach 130cm or more.
While this level is significantly lower than the tides which caused devastation last November, it is still high enough to cause problems – including flooding in St Mark’s Basilica.
On Sunday, St Mark’s Square was flooded again as the tide reportedly reached 101cm.

In case anyone was thinking that MOSE meant an end to seeing St Mark's Square under water here are some photos from this morning. The tide only reached 101cm and the barriers only get raised with a forecast of over 130cm. pic.twitter.com/Rh2nsscxv6