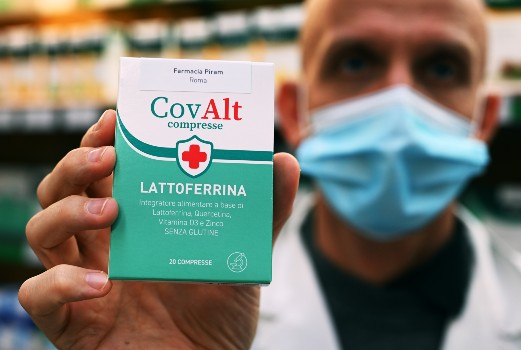 Lactoferrin, a protein found in high concentrations in breast milk, has undergone a small clinical trial in Rome and the organisers reported positive results but said more research was needed.

There has been no confirmation that the drug is effective against coronavirus, but  pharmacies in central Rome told AFP they were dealing with dramatic surges in demand in a country with one of Europe's highest death tolls.

“We don't know anything about this product – we're blind too,” a pharmacist told AFP on condition of anonymity, confirming that demand was spiking. “When people are scared, they will believe anything.”

The demand for lactoferrin followed a local news report in July in which Elena Campione, a dermatology professor from the Tor Vergata university in Rome and one of the organisers of the trial, made striking claims about her research.

“We decided to treat patients with Covid-19, in the early stage of the disease,” she said.

“It was incredible but 10 days after the beginning of the therapy, the symptoms disappeared and the PCR test (for coronavirus) were negative.”

The report went viral on social media, with banners added by a user proclaiming “food supplements block Covid-19: Italian research discovers” and “how will they convince us we all need to be vaccinated now?”

The video died away after its initial popularity but resurfaced as virus cases began to rise, surpassing 25,000 a day by the end of October.

Although the substance is sold most often as a supplement for babies, it is also branded by one firm as “CovAlt” and sold in a product range that includes hand gels and other items associated with the virus.

The social-media hullaballoo helps sales of these types of products, but some experts are not impressed.

“I am getting many requests about this, so I respond collectively to everyone,” Roberto Burioni, a virology professor in Milan who runs a website called Medical Facts, wrote on Twitter.

“There is no clinical evidence to indicate the usefulness of lactoferrin in preventing or treating Covid-19.”

They recently ordered a doctor to stop making similar claims about his lactoferrin products and cited him for carrying out unauthorised studies.

Dr Gabriel Serrano is now reportedly facing sanctions from the regional health authority in Valencia over his activities.

However, the positive coverage of lactoferrin largely continued in Italy, with an uncritical article in Repubblica newspaper on Thursday proclaiming in its headline: “Lactoferrin protects against the virus.”

The paper on Friday ran another article with news that the research was inconclusive.

Meanwhile, a large pharmacy in central Rome told AFP they were now shifting up to 100 boxes of the supplement each week compared with just two or three in a month in normal times.

“But if someone comes and buys in bulk, you just know they're buying it because of Covid.”

Another pharmacist, standing in front of boxes of “CovAlt” and other pills, told AFP her small family outlet had seen an upsurge in demand — and even that some people had come with prescriptions from their doctor.

“They used to come and ask for advice on what they could take to maybe boost their immune system against Covid,” she said.

“Now they come and ask for these lactoferrin products by name.”

She said she had seen the product flying off the shelves in bigger pharmacies, describing demand for such unproven products as “like a psychosis”.

AFP contacted Laboratorio della Farmacia, which manufactures the CovAlt range, and the health ministry but received no response.