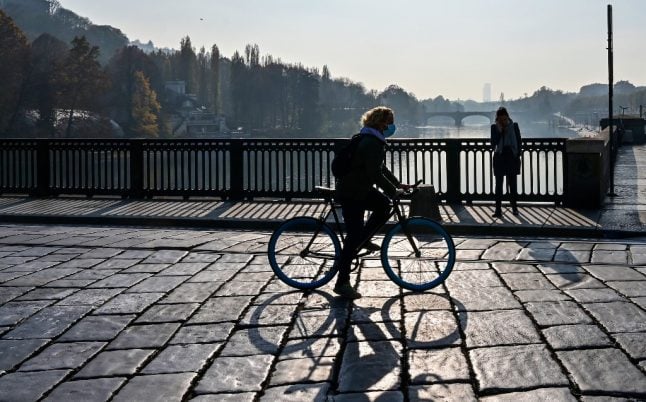 Cycling in Turin, where coronavirus restrictions have just been relaxed. Photo: Miguel Medina/AFP

Note: We have chosen to make this article paywall free. The Local relies on our readers signing up as Members. Please consider joining our community. For more information, click here.

This article was last updated on November 30th.

Under Italy's latest emergency decree, the Italian goverment tightened the coronavirus rules for the fourth time in three weeks in response to the country's worsening coronavirus situation.

As well as introducing a nationwide curfew, the government announced a new national three-tier framework which means certain rules now differ based on where you are in Italy.

READ ALSO:  The form you need to go out at night under Italy's national curfew

The first rules came into force on Friday November 6th and have been updated several times since, most recently on Sunday, November 29th.

The following measures, contained in the official text of the latest emergency decree, apply across the whole country until at least December 3rd.

Evening curfew
Under the new decree, Italy declared a nationwide curfew between 10pm and 5am.
This means you must stay indoors unless you can prove you need to leave the house for work or health-related reasons. In that case, you'll need to take a copy of the self-certification form with you.
Museums and galleries must close, and shopping centres are shut at weekends.
Bars and restaurants are closed at all times in high-risk areas, though delivery service is allowed and takeaway is also permitted until curfew begins at 10pm.
Bars and restaurants were already closed to the public at 6pm nationwide under measures introduced in October. 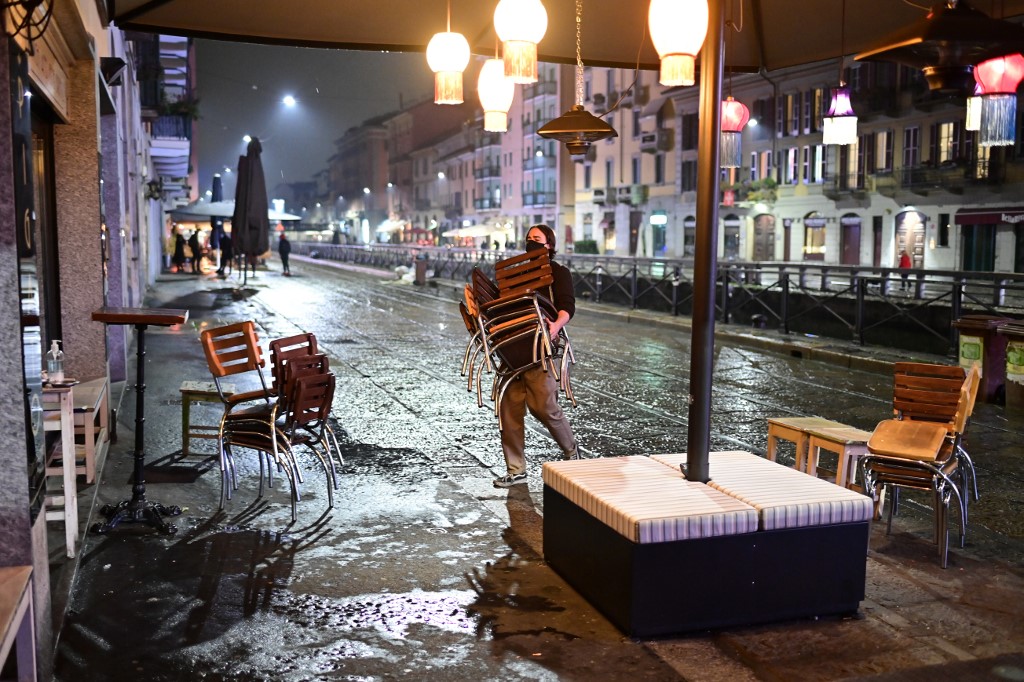 Photo: AFP
The number of passengers on public transport has been cut from 80 percent to 50 percent, with the exception of school transport.
People are asked to only use public transport if is absolutely necessary or for work.
Public agencies and private firms have been told to allow employees to work remotely as much as possible.
Further restrictions in red and orange zones

In addition to the national rules above, the new regional tier system means red, orange and yellow zones have differing restrictions.

From Sunday November 29th, the regions are classified as follows:

If a region is currently an orange zone, the national rules apply, plus:
People in orange zones are not allowed to travel from one area to another unless for essential reasons, according to the decree text, by either public or private transport.
You can enter or leave an orange or red zone only for reasons of work, study, health or emergency, which must be justified using a self-certification form.
Bars, cafes, restaurants, pastry shops and other food businesses must close to the public.
Home delivery is still allowed, and takeaway is permitted until curfew at 10pm.
Shops including hairdressers and bookshops remain open.
In the higher-risk red zones the national and orange zone rules apply, plus:
In addition to not being allowed to travel from one municipality to another, people in red zones are not allowed to move around within their own area unless for essential reasons, by either public or private transport.
If you need to leave your home for work, study, health or emergency reasons these must be justified using a self-certification form.
You can only enter or leave an orange or red zone for the same urgent reasons.
In addition to bars, cafes, restaurants, pastry shops and other catering businesses being closed to the public, as in orange zones, shops are closed except for those deemed essential, which include supermarkets and other food shops, tabacchi, bookshops and stationary shops.
Hairdressers and beauticians can also remain open.
Distance learning is mandatory for the second grade of middle school (scuola media) and upwards in red zone areas, and for high schools everywhere else.
Infant and primary schools (scuola dell’infanzia, scuola primaria) may remain open for in-person teaching across the country, including in red zone areas, the decree states.
All sports activities are suspended but “motor activity” (solo exercise such as running or jogging) is allowed, the decree states.
Regional and city authorities may also put their own additional measures in place in response to the situation locally.
READ ALSO:  Where to find the latest Covid-19 information for your region of Italy
Many other rules, which have now been in place across Italy for months, remain in place under the latest decree.
Cinemas, theatres, gyms and fitness centres were shut down by a previous decree on October 24th.
Betting shops, bingo halls and arcades are also closed, and slot machines in bars and other businesses cannot be used.
Q&A: Your key questions about Italy's coronavirus rules answered 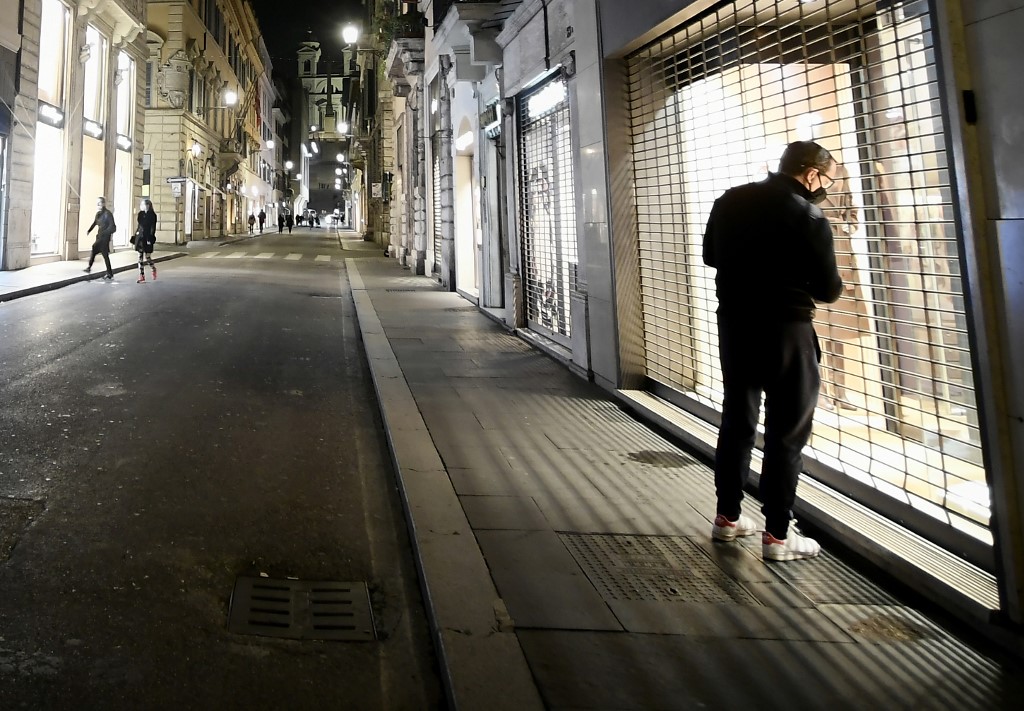 Photo: AFP
Face masks remain mandatory in public
Wearing a mask in Italy is obligatory whenever you leave your home, at all times of the day and in all parts of the country, under rules introduced on October 7th.
The fines for refusing to wear a mask are currently between €400 and €1,000, with police patrols deployed to check that people are complying.
The requirements on social distancing and regular handwashing and sanitising also remain in place.
People are instructed to keep a distance of one metre from others at all times, and anyone who with a temperature above 37.5 degrees Celsius is obliged to stay at home.
International travel restrictions remain in place
The rules on travelling to Italy remain unchanged under the latest emergency decree.
Unrestricted travel is still permitted from most EU countries as well as Schengen zone countries.
Travellers are still divided into six categories with different rules applicable, depending on the country they are travelling from.
Mandatory testing for some travellers

Travellers from several other European countries including the UK are required to take a test on or before arrival in Italy.

Travellers can either get tested before their journey – both the PCR nasal swab and the finger-prick tests are accepted, so long as they're carried out no more than 72 hours before your journey – or within 48 hours of arriving.

READ ALSO: Travelling to Italy? Here's what you need to know about coronavirus tests

Rules are subject to change at any time in any of these 20 regions, as well as in Italian cities under municipal rules.
For this reason you should check the rules with the local authorities in your city and region, and in any city or region you plan to visit.
See the Italian health ministry's website for more information on the current public health measures.