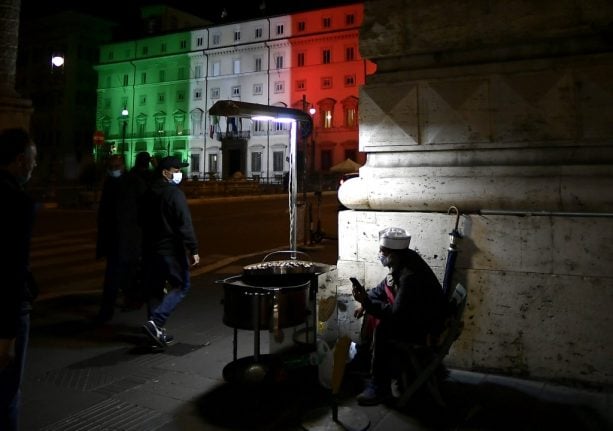 Photo: Filippo Monteforte/AFP
Italy's prime minister announced on Tuesday the country would impose a nationwide curfew from 10pm to 5am along with a raft of other new restrictions as Italy struggles to get a surge in new coronavirus cases under control.
The new rules will now come into force on Friday November 6th, a day later than originally planned, the government announced on Wednesday evening.
GRAPHS: Track the spread of coronavirus in every region of Italy
The delay applies to all restrictions included in Italy's latest emergency decree (official text here, in Italian) signed by the prime minister on Tuesday, according to an official notice from Palazzo Chigi released on Wednesday night.
“All the new measures envisaged by the latest dpcm – those reserved for the yellow, orange and red areas – will be in force starting from Friday November 6th,” the release stated. “This was decided by the government to allow everyone time to organize their activities.”
Under the new rules from Friday November 6th, Italy's 60 million residents will be required to stay home from 10pm until 5am, except for proven work or health reasons. In this case, you'll need to take a copy of the self-certification form.
Further restrictions will also apply in areas designated higher-risk red or orange zones.
On Wednesday night, Prime Minister Giuseppe Conte announced that regions were classified as follows:

Yellow zones: All other regions
READ ALSO: How Italy decides which regions are Covid-19 red zones
People in the highest-risk zones are told to stay within their comune (city or town), and are only allowed to leave for work, study health or other essential reasons, as Italy brings in the strictest measures since its two-month spring lockdown was eased.
Meanwhile, new national measures include the closure of shopping centres at weekends, and the complete closure of museums and galleries.
Bars and restaurants will need to close in high-risk areas, though delivery service is allowed and takeaway is also permitted until curfew begins at 10pm.
Bars and restaurants already close at 6pm nationwide under measures introduced late last month, a move that sparked a series of small but sometimes violent
protests.

The number of passengers on public transport will also reportedly be cut from 80 percent to 50 percent.
People have also been asked to only use public transport if is absolutely necessary or for work.
Public agencies and private firms have been told alloe employees to work remotely as much as possible.
Find all of The Local's latest coronavirus updates here.