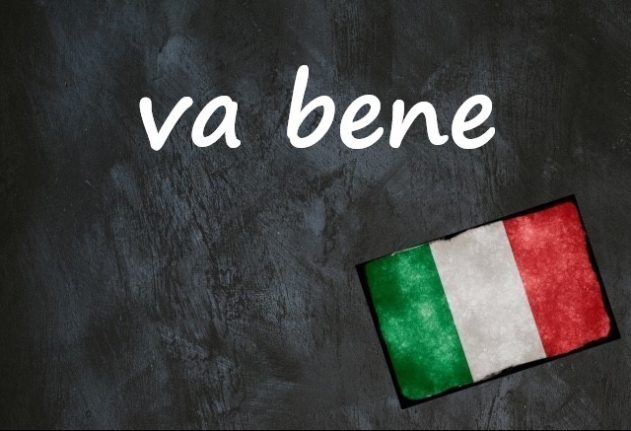 This is one of the most important phrases you'll need to know before coming to Italy. It means ‘ok’ or ‘alright’, and you’re going to hear it every five seconds.

Va bene literally translates as 'goes well' and, if things are going well, you’d use it in response to the question come va? (how’s it going?)

Just like ‘ok’, you can also use it to show that you understand what’s going on (that is, if you do.)

– The museum closed an hour ago

But there are plenty of situations where you might use it. If you can imagine all the different contexts and intonations in which we could use the word ‘alright’ in English, then va bene is the Italian equivalent.

You’ll probably also hear it being shortened to “vabbè’

This word can be just a shorter form of the same phrase. But in some contexts, it means “whatever”, not “ok”.

As the video below tells us, the difference is mainly about your enthusiasm for something.

If someone asks you, ‘Andiamo al cinema?’ and you respond ‘si, va bene’ it probably means you’d like to go to the cinema.

But if you respond with ‘vabbè’, you probably don’t care much about going to the cinema, but don’t have any other suggestions. You might shrug your shoulders when you say ‘vabbè’.

Just like in English though it all depends on the intonation.

A cheerful ‘vabbè’ just means ‘ok’, while I’ve seen Italians inject many layers of shade into a ‘va bene’ (when things were clearly not va bene at all.)

And sometimes it’s one of those words, like comunque, that is just inserted into conversations any time, meaning nothing much at all, as in: allora…va bene ('so then…alright’)

If things are going really well that day, you might even hear the superlative: ‘va benissimo!’

Va benissimo is one of my all-time favourite Italian phrases and I use it all the time, probably in places where it doesn’t really work.