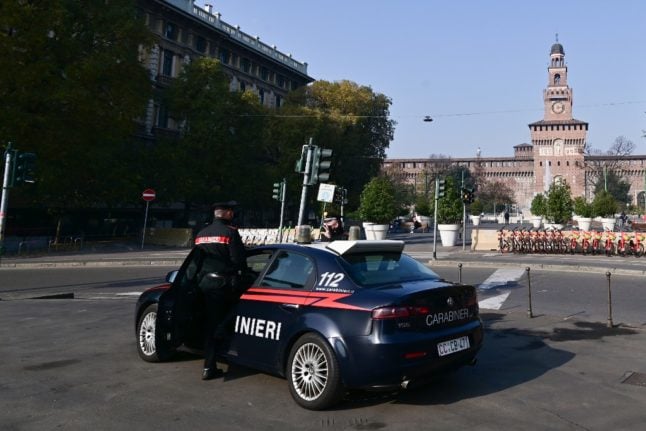 Carabinieri (Italian police) officers in front of Milan's Sforza castle on November 7th. Photo: Miguel Medina/AFP
Since Italy’s new tier system turned the country into a multicoloured patchwork of varying coronavirus restrictions this month, The Local has had dozens of emails from concerned readers with queries about driving from one part of the country to another.
Many are worried about getting the rules wrong as they struggle to keep on top of varied (and constantly changing) regional restrictions.
All non-essential travel in and out of Italy’s red and orange zones is prohibited, as is travel between towns or comunes within those zones.
People in red zones are asked to avoid moving around even within their own towns.
Non-essential travel is also banned nationwide between 10pm-5am under an evening curfew introduced at the same time.
THE RULES: Where and when is travel restricted within Italy right now?
“Essential” reasons for travel include getting to and from work or a medical appointment, or returning to your place of residence, according to the current emergency decree.
If you need to travel, you must fill out a self-certification form (find it here) and be prepared to explain your trip to any Italian police you may encounter – which is of course no small task for those still getting to grips with the Italian language.
Despite doing everything possible to make sure they’ve complied with the rules, many readers have written in to tell us they’re unsure about various details and struggling to find official information, and some say their unavoidable trips have been fraught with anxiety.
While the rules obviously need to be followed, despite their best efforts many people say they are unclear as to what they are in some cases.
One reader said email enquiries to the US Embassy about whether or not they were allowed to drive to the next region to travel home  “did nothing for our confidence, as they told us to ask the police if we were allowed to make the drive.”
But how worried should you really be about being stopped and fined for an accidental mistake?
During Italy’s strict lockdown in spring, police checks were a fairly common occurrence across the country, with patrols stopping cars at checkpoints within cities, and questioning pedestrians in the street about their reasons for being out of the house. A police officer checking a driver's paperwork at a road checkpoint during lockdown in March. Photo: AFP
This time around, there seem to be far fewer checks in place.
Reader Michael Minerva from Washington DC, who had been staying with his wife at their home in Tuscany when the stricter rules came in, wrote in to tell us about his drive to catch an early morning flight back to the US from Rome’s Fiumicino airport on Sunday November 15th, travelling during curfew hours.
“Although we had our completed autodichiarazione in hand, we had no confidence things would go smoothly in an encounter with Carabinieri or other police,” he said.
“We had expected to encounter Carabinieri checkpoints in towns, but didn’t. We encountered a total of seven cars on the two hour drive – three civilians and four Polizia Stradale, and all four of them on the SS1.”
“In each case, a PS car came up behind us then passed us as if nothing was up. One might have shined a light in our car as it sped by, but that’s about it,” he explained.
“For the life of me, I cannot imagine why nobody stopped us. It’s hard to imagine what a patrol car is doing out during a curfew if not enforcing the curfew, but, hey, it’s Italy. It doesn’t always make sense.”
READ ALSO: 'Expect the unexpected': What you need to know about driving in Italy
“Anyway, all our anxiety about breaking curfew (legitimately, but still) was misplaced, and the trip went very smoothly.”
Meanwhile, another reader drove all the way home to the Campania region from Germany last week, and was only stopped once on the two-day journey – in France.
“I had no problems because of the restrictions. Frankly, it was surprisingly normal,” said Salvatore, from Avellino. “I expected to be stopped at least once in italy but clearly not.”
Several readers also said they have not yet seen any checkpoints when travelling within their region for work, including in red zones where the rules are stricter.
Of course, checks could become more stringent at any time and breaking the rules can land you with a hefty fine, so it’s wise to be cautious and make sure you’re up to date on the latest restrictions.
However, it seems there's no need for anxiety about potentially having to explain yourself at multiple police checkpoints when making a necessary trip.
Q&A: Your key questions about Italy's coronavirus rules answered
Motorways (including rest stops and gas stations) are open as usual, and there are no restrictions on driving through regions to get to another part of the country/leave the country.
If you need to stop on the way, for example an overnight stay on a long journey, hotels can remain open, even in red zones – though the rules on staying with friends are unclear. It’s best to check the local rules in the town or city you’ll stop in – here’s how to do that.
If you need to pick someone up, or be picked up, such as from the airport or train station, this is allowed as long as you follow rules on mask-wearing in the car. This is necessary if you travel with someone you don’t live with. We recommend checking your region’s local rules on this, however.
If you need to travel within Italy anytime soon and are concerned about having to explain yourself to police, have your completed form and if needed, a rehearsed line of Italian or two at the ready (and, of course, the patient attitude needed for any such interaction in Italy!)
Though it's true that the rules can be interpreted and applied differently depending on which police officer you meet, officers at checkpoints usually have a stack of forms ready to hand out, and seem mainly concerned with making sure people understand what the rules are.
For more information about Italy's current coronavirus rules, please see our guide and FAQ.
For further details on the coronavirus situation in Italy, visit the Health Ministry's website (in English).