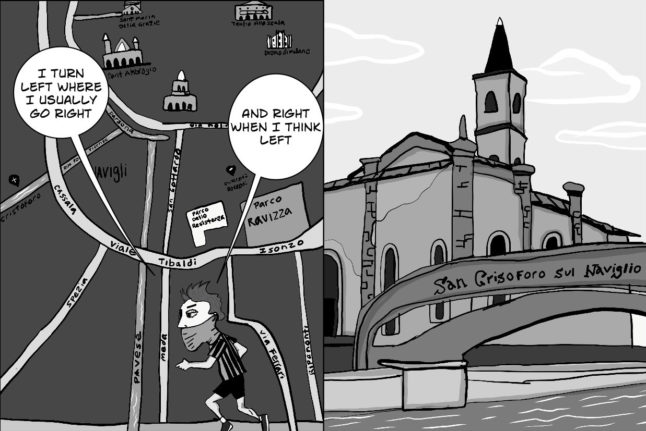 What have you been doing to get through Italy's second Covid wave? Image: Adam Rugnetta

Everyone in Italy has felt the effects of the Covid-19 pandemic.

For Adam Rugnetta, an American teacher living in Milan, they've shaped his life for much of the past year.

As an author and illustrator, one of the ways he found to process the situation was to draw – at least the first time round.

“I was able to weather the first lockdown because I was writing my book, Beyond Choice. So while I was saddened for the suffering, inside my home everything was going well,” he tells The Local.

“This lockdown, however, things seemed darker. The American election, the second wave, the Covid burnout was getting me down.”

Milan lies in one of Italy's 'red zones': high-risk regions under maximum restrictions, with only essential travel permitted, most shops and restaurants closed and schooling moved online.

Seeing infection rates and death tolls climb again, then returning to lockdown after months of relative freedom, has been tough.

“I was starting to sink, so I decided to inspire myself,” Rugnetta says.

With individual exercise one of the few outdoor activities still permitted, he has been using his runs around Milan to break the monotony and observe the city. On one recent outing, he was struck by an argument near the Navigli, the famous canals lined with bars and restaurants that are currently forbidden from serving customers.

“I was sitting there listening to chill-out music from a takeout place while guys were preparing to murder each other. The irony of the moment and the fact that I could see it clearly made me think it was time to start cartooning again,” he says.

“Luckily, it worked. Running and cartooning brightened my days. This project, along with some better news, are making me really feel the light at the end of the tunnel.”

See the illustrated version of the story: Originally from Buffalo, New York, Adam Rugnetta is a teacher and author living in Milan. You can find more of his work on his website, on Twitter and on Instagram. His graphic novel, Beyond Choice, is available to buy online.

As northern Italy swelters in temperatures of up to 36C with high humidity, a massive increase in electricity usage for cooling day and night has reportedly pushed the city’s electricity grid beyond its limits.

Milan’s world-famous Duomo on Thursday was forced to cancel the evening opening of its terraces due to the blackouts, shops were left without light or air conditioning, and disruption continued over the past few days in “all four corners of the city” according to local news outlet MilanoToday.

Electricity supplies continued to cut out on Tuesday for “half an hour here, an hour there, two, three, or even 14 hours,” MilanoToday reported

“Long and shorter blackouts occurred in several areas of the city. From Viale Fulvio Testi to Piazzale Macciachini, Viale Sarca and Viale Jenner, many buildings were left in the dark due to the breakdowns,” the report read.

It was impossible to see how bad the situation was overall as there was no list of affected areas or overview available from the city’s electricity provider Unareti, reports noted.

HEATWAVE: 16 Italian cities on alert with peaks of 43C

Unareti told the city’s local edition of newspaper Corriere della Sera the issues were being “resolved in the vast majority of cases in a few minutes”.

Energy consumption in the city has reportedly increased by ten percent as temperatures rose over the last week and by 35 percent in a month amid a series of increasingly intense early summer heatwaves.

Milan is already among the European cities with the highest electrical power requirements per square kilometre, equal to five times that of Rome.

He said the “increasing use of air conditioners” as well as the move away from gas appliances is partly driving the surge in demand in central Milan, which covers “a relatively small area, completely urbanized, quite vertical”.

“There are now entire neighbourhoods where the power lines are electricity: the gas network is not even considered,” he said, pointing out that residents are buying electric “induction hobs instead of gas cookers, heat pumps instead of boilers, electric cars”.

With demand for electric appliances rising and 30 percent of vehicles in Milan expected to be electric by 2030, Unereti is working on increasing network capacity, he said.

Milan residents affected by electricity blackouts can check the situation in their area via the Unereti website.