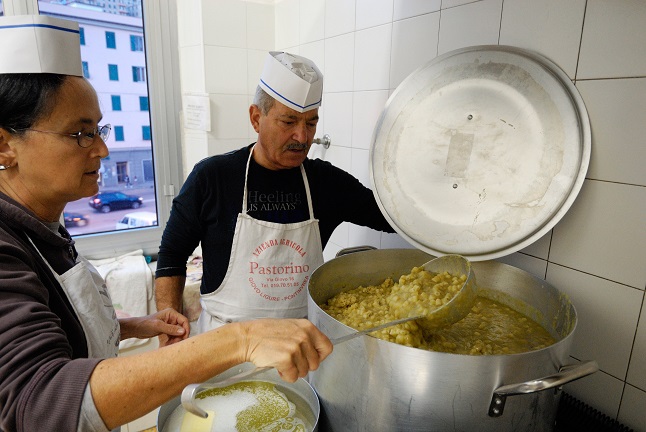 Cooking a meal for all who need it at a formerly abandoned train station in Genoa. Photo: ONDS

Today, the previously disused former station has come back to life.

This article is part of Changing the Narrative. Articles in this series are written by student or early career journalists who took part in The Local's training course on solutions-focused migration reporting. Find out more about the project here.

Since 2005, redecorated walls and refurbished buildings have turned it into a Help Center that supports marginalised groups in the area, with many flowing in and out to get a warm meal, basic medical assistance or simply take a shower. Of the thousand users coming to the Help Center every year, many from the low-income foreign population are benefitting from the services.

Across Italy, more than 400 social initiatives managed by social stakeholders have sprung up in disused spaces owned by the Italian railway network (RFI).

Unlike many national social protection schemes, most of these social projects do not abide by a logic of citizenship: people may show up and receive assistance even without showing any identity document. This allows the vulnerable fraction of the population like irregular migrants – often excluded from official government’s assistance – to benefit from a network of social programmes. The station buildings give marginalised people access to essential services from laundry to computers. Photo: ONDS

A way to give new life to unattended stations

“It all started when municipal administrations noticed these free spaces and asked to use them as a venue for municipal offices,” Ilaria Maggiorotti, the Manager of the Real Estate Assets for the Asset Management Department at RFI, told me. “From the outset, railways welcomed the practice rather positively, given that these spaces would otherwise have remained unattended.”

Unattended stations that are far from the city centre can often end up vandalised or illegally occupied.

“Now, thanks to their social re-use, the presence of these stations enriches the area,” added Donatella Cicolani, manager of social assets at RFI.

In time, the public administrations began to sublet these spaces; hence the idea of RFI to grant the lease directly to local or national non-profit organisations.

The outside of the Genoa station, now a Help Centre. Photo: ONDS

Maggiorotti explained that loans for use are directly requested from the 15 local directorates of RFI scattered throughout Italy. When the local municipalities or associations notice the empty spaces, they submit the request for having the space on loan. “On average, the entire process takes a few months, and it is completed within a year”, she said.

The loan for use is generally free, with a contract lasting up to five years. The utilities are paid for by the association. The terms of the contract require the association to use the venue for a project with a social impact on the local area.

“At the end of the five years an evaluation is made to understand whether to renew or interrupt the agreement” Ms Maggiorotti said. “There are some cases in which the evaluation resulted into the contract being rescinded, usually because the association has not served out the condition of looking after the property.”

Since 2007, in the former RFI’s after-work building of the station in Cervia, people can get food for free once a day thanks to Mensa Amica, a project coordinated by the voluntary association ‘Un Posto a Tavola’ (A Place at the Table). Half of the people who turn up each day do not hold Italian citizenship.

Despite stagnated political discourse on migration in the country, Mensa Amica seems to have overcome Italy’s social impasse. “We had volunteers coming from different political backgrounds and with very different views; yet, they all worked together to help people in distress” said Silvia Berlati, the director of Mensa Amica.

The animated canteen has created a sturdy community around it. Eventually, this has helped with people’s re-integration, leading some of them to reciprocate the help. A centre in Messina before being transformed for social purposes. Photo: ONDS

“At a certain point, the province of Cervia started hosting refugees, mostly young adults. We tried to have them volunteer within a network of local associations, which was a daily nudge for them to open up and integrate within the community”, said Silvia Berlati.

Lucky Aniakor, a 24-year-old asylum seeker from Nigeria, heard about Mensa Amica by chance in 2019. “I have been told that there was a place where migrants were being given food, so I thought it was a perfect opportunity for me to meet with people and learn how to cook”. After attending for a while, Aniakor started to volunteer with the association himself, taking part in their circular model of solidarity.

“When I arrived in Italy in 2017, I used to live in a camp for immigrants where the only thing I could do was sleep, eat, and wake up. At a certain point, I could not stand doing nothing anymore,” Aniakor explained. “When they offered me the opportunity to volunteer in Mensa Amica, I saw it as a chance to return the favour while learning Italian and to cook local dishes”.

Aniakor said that the association has done more than giving him food: “In July, I was in desperate need for a job, so I told my ‘employer’ at Mensa Amica and they put me in contact with a hotel manager who eventually hired me for four months.”

The initiative is well-known in Cervia, a central Italian town with less than 30,000 inhabitants. This has given the association the chance to keep up with the running costs of the project, which consist mostly of utilities. “To keep the association open we need on average €35,000 euros a year; €17- 23,000, the bigger share, comes from private donations,” said Silvia Berlati, the director of Mensa Amica.

While a project based on volunteering and donations might seem like a nice fairy tale, this structure poses substantial hurdles. When operating to full capacity pre-Covid-19, the canteen managed to host 29 people per shift, requiring at least seven volunteers. As Mensa Amica is completely run by volunteers, not having permanent staff is often a struggle. The canteen at the Genoa station. Photo: ONDS

Likewise, the precarity stemming from the fragmentation and volatility of funding undermines the association’s ability to plan longer-term as well as its capacity to overcome unexpected expenses.

In January 2020, Silvia Berlati announced that the association was at risk of closing due to insufficient funding and the sudden unexpected expense of a costly oven. Eventually, they managed to collect the money they needed to keep the doors of the association open. Still, there is a risk that something similar could happen again.

From places of marginalisation to hubs of integration

In parallel to the projects that are sprouting between the walls of many Italian unattended stations, 18 Help Centres have been established since 2002 near the most important attended stations across Italy. The Help Centre in Genova Cornigliano is one of them, albeit the only one to be located in a disused station.

These projects fall under the wider management of the ONDS (the National Observatory of Solidarity in the Italian railway stations). Alessandro Radicchi, President of Europe Consulting and director of ONDS told me that “ONDS follows a different logic than the one adopted for the social re-use of unattended stations.” Unlike the average five years of lease given to associations in unattended stations, the Help Centre has a loan for use of six to nine years on average.

Help Centres offer different types of services depending on the preliminary assessment of the neighbourhood’s needs, but the intention is always to address social marginalization in the railway areas. They take on cases of people in need and either redirect them to the local social assistance network or assist them directly, offering them services like laundry, free meals and so on. Washing machines in one of the centres. Photo: ONDS

“Our services cater to extreme marginalised people who show up at our counters in Italy’s major train stations. Help Centres are bodies that deal with people who do not have a home or who live in situations of extreme poverty”, Radicchi said.

The station is a good place for a person who has nothing and is in search of human relationships. “There are shops where you can get a coffee or a sandwich and bathrooms that can be accessed using someone else’s receipt found on the ground”.

As Radicchi explained, in attended stations the RFI generally grants spaces that are poorly used and so tend not to have a major commercial impact.

Non-EU citizens account for a great extent of their beneficiaries. “Of the 22-25,000 people a year who show up at the counters of the entire network, less than a quarter are Italian, while 10 percent come from EU countries and about 65 percent are non-EU citizens” he clarified.

As part of the migration movement in Italy, Help Centres intercept a different type of poverty than the one that can be found in the reception centres. “Transit poverty, mainly migrant, mostly young; in 2019 alone, young adults between 18 and 29 years old made up 28 percent of the beneficiaries – and they are the most represented group” Radicchi explained. “These percentages cannot be found in the reception centres, where on average you find people from 60 to 75 years of age.”

In Italy, where many cities face space problems due to public mismanagement and the wearisome touristification of urban spaces, giving new life to disused public buildings by devoting them to social projects could restore the broken social fabric while easing the hardship of pressing social issues. The network of associations thriving in RFI property is growing, but the model has yet to exhaust its potential. As of today, less than a quarter of the 1,700 available unattended railway stations has been used; as the majority lingers empty, the great social impact of these places remains to be leveraged.

Sofia Cherici is a freelance multimedia journalist and reporter. Originally from Italy, she studied at Sciences Po in Paris, France, and worked in Libya, Tunisia, and Turkey. She is specialised in social policy and social justice in Europe and the Middle East and North Africa region.